Shake Shack Could Be Adding This Surprising New Menu Item

In this photo illustration a cheeseburger and french fries are served up at a Shake Shack restaurant on January 28, 2015 in Chicago, Illinois.
Scott Olson—Getty Images
By Claire Zillman / Fortune

Shake Shack isn’t afraid to mess with a good thing.

The burger chain that reported stellar first-quarter earnings last week has hinted that it’s considering going in a new direction: chicken. A subsidiary of Shake Shack called SSE IP filed an application on April 20 to trademark the name “chicken shack.” The filing indicates that the restaurant could introduce a new chicken item or open a chicken-focused restaurant.

Either way, the addition of chicken would be a divergence from Shake Shack’s beef-heavy menu. The only chicken item it offers now is its chicken dog, which is made with chicken, sausage, and sage.

Shack Shake did not immediately return a request for comment. It told CNBC, which first reported the news, that it has no “new items to announce at this time,” and that it’s always experimenting with new items in its test kitchen.

In chasing after chicken consumers, Shack Shake is targeting a hot menu segment. Sales of chicken entrees at fast food restaurants grew 3% to $5.4 billion in the year ending in March—quicker than burgers, whose sales grew 1% to $7.9 billion, according to data that research firm NPD Group gave to CNBC.

That said, Shack Shack’s chicken will be pitted against some serious competition. Atlanta-based Chick-Fil-A managed to surpass KFC last year as the nation’s leading chicken fast food restaurant by sales with less than half the number of restaurants and by operating one fewer day a week. (Chick-Fil-A restaurants, a chain founded by the deeply religious Samuel Cathy, are closed on Sundays.)

Interestingly enough, Chick-Fil-A announced in March that it was moving onto Shake Shack’s home turf: It will open a restaurant in New York City this summer.

A serious rivalry could be heating up. 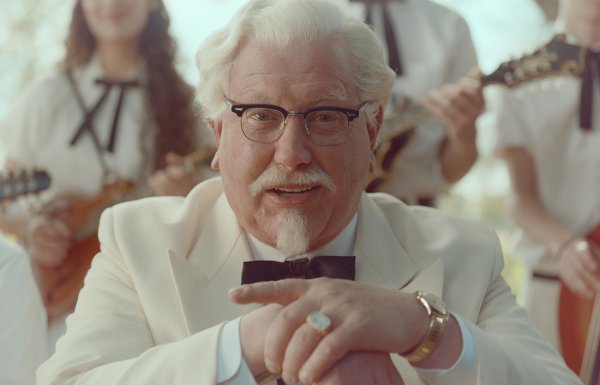 Check Out the Return of KFC's Colonel Sanders
Next Up: Editor's Pick