ISIS Must Be Stopped From Destroying Ancient City, U.N. Says

Part of the ancient oasis city of Palmyra, Syria, in 2014
Joseph Eid—AFP/Getty Images
By Vivienne Walt

After months of fierce fighting, ISIS captured the town of Palmyra northeast of Syria’s capital Damascus on Thursday, leaving the group in control of more than half of the country’s territory — and raising fears among experts that its fighters will begin smashing spectacular ancient sites.

Set on the strategic road linking Damascus to Deir al-Zour in eastern Syria, Palmyra contains ruins dating back 2,000 years from what was once one of the most prosperous and culturally rich cities of the Roman Empire. Until war erupted in 2011, thousands of tourists visited the site, which adjoins the modern-day town of Palmyra. In the middle of the ancient city is a colonnaded street, and nearby is a huge ancient amphitheater, and towering ancient temples with monumental arches and columns.

Those are all irreplaceable historic treasures, say cultural experts. “Any destruction of Palmyra is not just a war crime, it will mean an enormous loss for humanity,” Irina Bokova, director general of UNESCO, the U.N.’s cultural organization, said in a video appeal early Thursday, just hours before the militant group, the Islamic State of Iraq and Greater Syria, seized control of the city. “We just have to make everything possible to prevent its destruction. We need total mobilization of the international community.”

ISIS’s capture of Palmyra comes after months in which its fighters have systematically destroyed ancient ruins and artifacts, including smashing statues in the museum of Mosul, which the group captured last June. ISIS claims the antiquities, which far predate the arrival of Islam, represent idol worship, which violates the group’s ideals. Both Iraq and Syria were key trading centers for the ancient empires and contain numerous important sites.

Quantities of ancient artifacts have also been lost to looting and smuggling, with Syrians selling them to criminal networks across the border for trade on international markets. UNESCO staff have helped Syrians to ferry artifacts out of the war zone, and have trained Interpol, border officials and even art auctioneers in how to detect looted items. “We’re doing a lot of effort on all movable objects to get them to safer places,” says Karim Hendili of UNESCO’s World Heritage Center in Paris. UNESCO declared the ancient city a world heritage site in 1980.

As ISIS fighters steadily closed in on the city in recent weeks, Syrians began a furious effort to smuggle out to safety whatever antiquities they could, in order to prevent them being destroyed, should Palmyra fall. The effort began two months ago and accelerated this month as ISIS’s victory looked increasingly likely, according to Cheikmous Ali, of the Association for the Protection of Syrian Archaeology, a volunteer group that has coordinated clandestine rescues for ancient items in areas now controlled by ISIS. Ali told the BBC on Thursday that the group had managed to remove many antiquities from Palmyra. “Some objects are still there,” he said. “It is not 100% empty.”

But experts cannot say for sure how much of Palmyra’s ancient treasures might have been lost or destroyed in years of war. Indeed, they might well have to wait until ISIS posts video from the ground, before knowing the true extent of what has been lost, or is at risk. “As long as we cannot go on the ground to assess accurately it is difficult to say,” Hendili tells TIME. “What we know is that recently the fighting between the Syrian government and the extremists got closer and closer to the site. But the site is very big, with an oasis and a citadel. We will have to cross-check before we know the situation.” 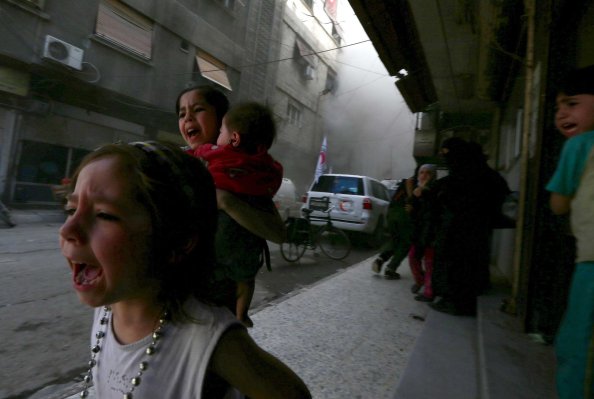