Australians Are Trying to Decide if It's O.K. to Swear at Sheep

A complaint by People for the Ethical Treatment of Animals (PETA) over the abuse of animals at a remote Australian sheep station has prompted a debate over whether sheep can be cursed at.

The Australian Broadcasting Corp. (ABC) reports that PETA’s complaint, made in September 2014, was not solely about verbal abuse, but the use of offensive language toward the animals was an element of the complaint that had been taken seriously by animal-welfare organization the Royal Society for the Prevention of Cruelty to Animals (RSPCA).

Steve Coleman, CEO of the New South Wales branch of the RSPCA, told the ABC that the organization would investigate “an allegation that puts at risk an animal, that would cause it unnecessary suffering.”

Ken Turner, the operator of Boorungie Station in outback New South Wales, where the cussing was alleged to have taken place, said, “The allegation was that bad language was used by an employee on the property in front of the sheep, and that they could have been offended by the use of bad language.”

The president of Lawyers for Animals, Nichola Donovan, argued that verbal abuse of “an extreme nature” could constitute “an act of violence” against an animal.

Although the PETA complaint has now been dropped, pastoralists remain wary about being seen as rude and upsetting by their woolly charges. The issue was debated at last week’s annual general meeting of the Pastoralists’ Association, where many members felt that colorful language was occasionally necessary during mustering and shearing.

Addressing the meeting, Dean Boyce of the RSPCA conceded that many of the complaints the organization received each year were “petty.”

For his part, Boorungie Station’s Turner said he had no plans to mind his own language in front of sheep. “We’ll continue as normal,” he told the ABC. 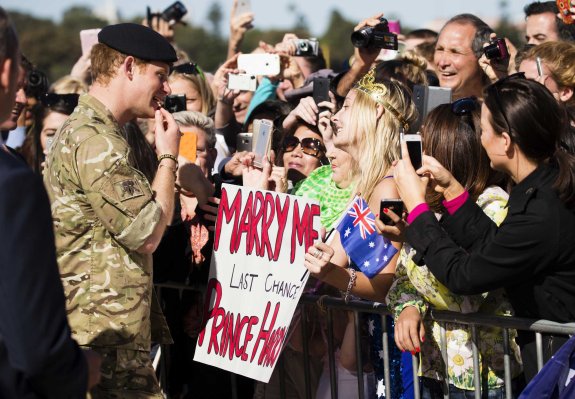 Prince Harry Gets a Marriage Proposal and a Big Kiss as he Leaves Australia
Next Up: Editor's Pick