A soldier shovels mud from a house damaged by a mudslide in Salgar, in Colombia's northwestern state of Antioquia, May 19, 2015.
Luis Benavides—Associated Press
By Helen Regan

An 11-month-old baby has survived a huge mudslide in Colombia that killed at least 78 people.

The child’s mother and at least 11 other relatives perished when a flash flood swept through the town of Salgar in northwest Antioquia province Monday, destroying dozens of homes, reports the Associated Press.

Rescuers found Jhosep Diaz lying facedown in the mud more than a mile from his home. Doctors say the infant was cold and hypothermic but believe he survived because he was sleeping in a padded crib when he was swept away.

“He was unconscious and didn’t open his little eyes but was breathing,” Dr. Jesus Antonio Guisao told AP on Wednesday.

The mudslide was the country’s worst natural disaster since the earthquake of 1999 that killed about 1,000 people.

According to the Red Cross, between 50 and 80 people are believed missing, but authorities say there is no chance of finding any more survivors.

The boy’s grandfather Alvaro Hernandez is expected to gain custody. “My grandson’s survival is a miracle,” he said. 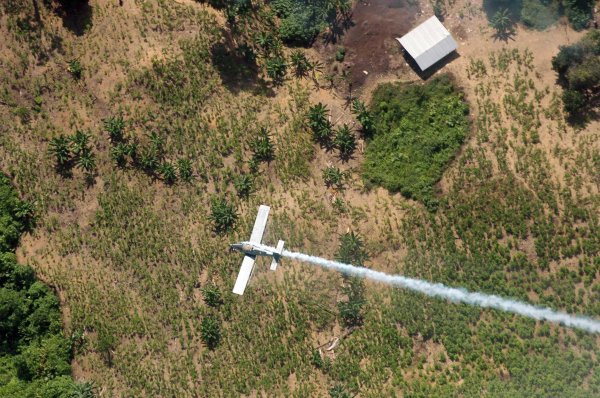 Colombia Defies U.S. and Halts Spraying of Cocaine Crops
Next Up: Editor's Pick