Apple seems to have had a hand in dressing the Galactic Empire—at least from a design perspective.

We’re not talking Levi 501s and black mock turtlenecks, as was the signature style of late Apple CEO Steve Jobs. Rather, Star Wars costume designer, Michael Kaplan, tells Vanity Fair in a Q&A that he channeled the tech giant’s minimalist taste in creating the uniforms worn by characters in the next installment of the blockbuster series.

Kaplan cites a number of inspirations ranging from the Third Reich to the sci-fi classic Blade Runner to Sam Spade, the fictional detective in The Maltese Falcon. But he also gives a nod to Apple. Here’s the relevant bit:

Earlier this year, a New Yorker profile of Apple’s chief designer Jony Ive mentioned that he had some minor input on the look of a new lightsaber. “Ive once sat next to J. J. Abrams at a boozy dinner party in New York, and made what Abrams recalled as ‘very specific’ suggestions about the design of lightsabres,” journalist Ian Parker writes.

Later, Parker reports that Ive backed off from claiming he had any substantial impact—especially on the subject of the weapon’s contentious cross-guard, the part just above the handle for protecting the hand.

It’s worth noting that the influences between Apple and Disney work both ways. One of the faces on the new Apple Watch features Mickey Mouse, after all.

For everyone else, here’s a gif from Apple’s notorious 1984-style commercial that hints at the Empire’s boys in white. 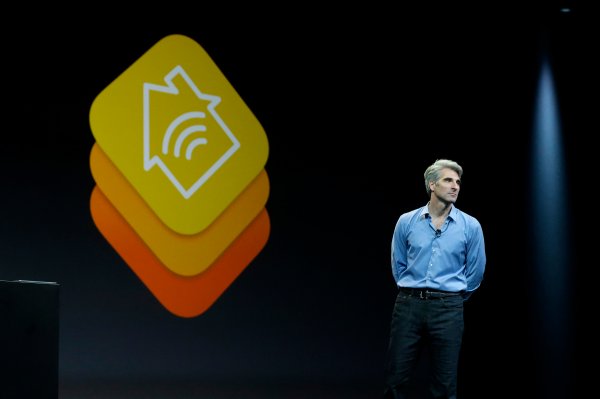 Here's What Apple's Next Big App Will Do
Next Up: Editor's Pick