Jeb Bush Doubles Down on His Last Name

Make no mistake: Jeb Bush is a member of that Bush clan.

After struggling last week to square his likely presidential campaign with his family tree, the former Florida governor is hitting the reset button. Where he previously tried to keep his father and brother — both former Presidents — at a distance, Bush is now doubling down on his lineage.

“I know you all know me as George and Barbara’s boy,” Bush said Wednesday as he opened a round table with business leaders in New Hampshire’s Seacoast. “You probably know that I’m George W.’s brother.”

There’s no escaping the family liability, no matter how much Jeb Bush’s advisers earlier thought he could. During a February speech in Chicago, Bush tried to paint himself as a different kind of leader and sought to stamp out comparisons to his family, especially his brother.

“I love my father and my brother. I admire their service to the nation and the difficult decisions they had to make,” Bush said. “But I am my own man.”

“I’m proud of my family,” Bush said Wednesday. “I love my mom and dad. I love my brother. And people are just going to have to get over that. That’s just the way it is.”

The family ties came to the forefront when Fox News’ Megyn Kelly asked Bush if he would have supported his brother’s decision to go to war in Iraq, even knowing that the Iraqi government did not possess weapons of mass destruction. Two days after he answered in the affirmative, he dodged the question and said he wouldn’t answer what he called hypotheticals. Aides tried to claim he misunderstood the question and move on.

His rivals for the GOP nomination didn’t yield. Democrats gleefully painted Jeb Bush as a third term for George W. Bush, who left the White House deeply unpopular over his decision to go into Iraq. Bush’s advisers struggled to respond as all corners of politics piled on.

By Thursday, Jeb Bush was telling voters that he made a mistake during the interview, and that he would not have gone to war in Iraq knowing that Saddam Hussein was not the threat George W. Bush’s Administration claimed he was.

“I would not have gone into Iraq,” Bush told reporters in Arizona.

It was a tough week for Bush and his campaign, and one Bush’s team now is looking to leave in the past. For Bush’s top advisers, it is now clear that there is no escaping the shadow of his brother or father.

“I’m not going to be in a witness protection program. I’m a Bush. I’m proud of it,” Bush told reporters. “What am I supposed to say?”

He said any campaign for President would have hiccups and stumbles.

Bush is slated to spend two days in New Hampshire, a state that is shaping up to be a state ripe with potential for his campaign. He was scheduled to take voters’ questions near Manchester, followed by business tours on Thursday in Concord and Salem. 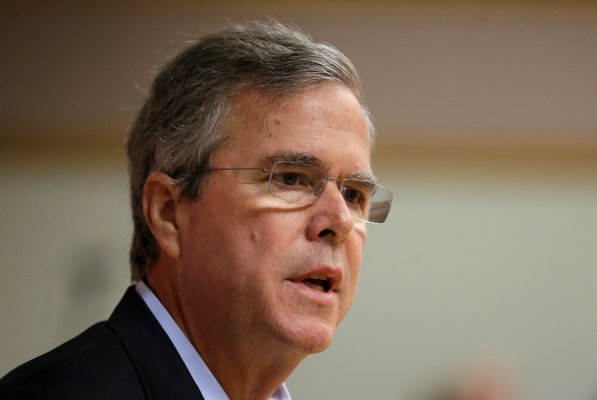 Bush Says Christians Can Refuse to Serve Gay Weddings
Next Up: Editor's Pick