Watch the Most Famous Late-Night TV Goodbye Ever

While the final installment of The Late Show with David Letterman has yet to take place, Bill Murray was likely Letterman’s Bette Midler.

During the second-to-last show of Letterman’s run on CBS, Murray made a cake-covered appearance for the ages. And when television stalwart Johnny Carson retired 23 years ago, Midler, below, famously appeared on the second-to-last episode of his program, The Tonight Show Starring Johnny Carson, ending that show with a rendition of “One for My Baby (and One More for the Road).”

In assessing Carson’s final shows, TIME wrote: “The sentimental high point came on Thursday night, when Carson’s final guest, Bette Midler, plied him with musical tributes, closing the show with a rendition of One for My Baby (and One More for the Road) as the camera showed Carson looking on, misty-eyed.”

Of course, Midler’s appearance wasn’t the end of Carson. For his final episode, he did without the guests, instead choosing to reflect on his past with the show. But he closed with those famous words, which TIME also chose to close out its review of the episode:

If Murray was Letterman’s Midler, on Wednesday night we’ll find out what Letterman’s “heartfelt good-night” be. 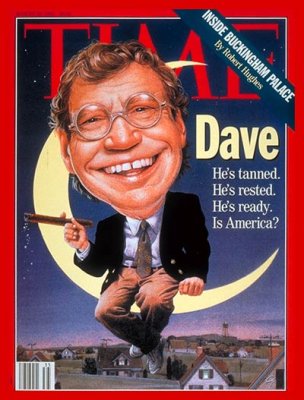 Why the TV World Once Doubted David Letterman
Next Up: Editor's Pick