We've Given in to Baby Worship. Ew.

Recently, I noticed some unusual activity in the car one lane over from my own: The driver was taking an iPhone video of a toddler, presumably her own, as he demolished an ice cream bar while strapped into his car seat. Happily, this was happening at a red light. Unhappily, when the light changed, it continued to happen, or at least that’s what I deduced from the cacophony of honking protest.

I was on my way to the National Gallery in Washington, D.C., which I mention mainly because, while there, I spent a lot of time looking at various Madonna(s) and Child(ren)—Byzantine, Florentine, Renaissance, Medieval, enthroned, in gardens, and so forth. As a Jew, I never quite got the Baby Jesus thing, but that’s neither here nor there. What’s both here and there, however, is that Giotto and countless other believing Christians were on to something—the mystery at the heart of existence, the yearning to make both conscious and observable a palatable act of God. Hence we see baby Jesus depicted in art, the embodiment of innocence, possibility, purity, perfection, and wisdom beyond knowing.

Actual babies, however, embody nothing more than their parents’ genes and hopes and dreams. We love them to pieces. We love them so much that we have no words for how much we love them. Or at least I did, when my own three children were small. Especially when they weren’t whining, or fighting, or throwing giant loud temper tantrums that made the lighting fixtures dance. The rest of the time, I reminded myself that I loved them, that I’d chosen this, that I still had half a bottle of good Scotch in the cabinet above the oven.

And yes, when my eldest was born, I did think that I was the first woman in the world to experience the miracle and challenge of motherhood. But I didn’t actually worship him, by which I mean put him at the very center of my universe, bow down to him, enshrine him in glory, and cast him as the sine qua non of existence itself. It never occurred to me to do so; for starters, I was too sleep-deprived. And you can bet the farm that my mother, grandmothers, and great-grandmothers didn’t view their own roles as mothers as anything more—or less—than a job description, the goal being to turn childish children into responsible adults.

Whereas what seems to be happening now, at least among those endowed with both time and money, is something akin to the worship of our children. At the National Gallery, while I was touring the Holy Family galleries, young children, some still in diapers, ran around the marble floors screaming and yelling and spewing snot while the parents not only didn’t hush them up or whisk them away (or slap them silly, as I wanted to do), but instead often snapped endless photos and videos of them—which, no doubt, they posted on Facebook. Because God knows that your life isn’t really happening unless it’s captured in pixels and disseminated around the Internet. Art? Who needs it when you’ve got endless photos of Baby?

The problem with all this, aside from how silly it is, is that children who are the center of their parents’ lives become brats. Children whose parents put their kids’ entertainment, social lives, futures, and schedules ahead of their own well-being soon learn that there is only one important person in the room, and that person is the person whose short life has already been captured on endless video clips. This is not good. This is not good at all. Not for the kid. Not for the grownup. Not for the family dog.

To me, the video record of our children’s every moment dovetails with what I think of as “grade inflation”—grade inflation that not only skews the actual record of our children’s often dubious academic achievements, but also the rhetoric adults use to describe their children in general. So what happens is, on the one hand, a first-rate math teacher is fired because he dares to give C’s to C students. (This happened at my children’s private day school in Baton Rouge, where they grew up.) On the other hand, these same C-students manage to graduate from college, only to be told that, for example, they are joining “the elite of the elite in terms of standards of excellence,” (which I’m quoting as best I can from memory, having just attended the college graduations of my twins.) In the meantime, every precious moment of their precious and extraordinary lives are being recorded, emailed, Facebooked, Pinterested, Snapchatted, YouTubed, iTuned, and Twittered.

And OK, yes, I agree: Not every young person, or new parent, indulges in such—shall we say laxity? Especially among people who inhabit the lower end of the socioeconomic spectrum, where bad manners—disrespecting your elders in particular—doesn’t fly, in part because no one has either the time or the energy to indulge children’s worst inclinations, and in part because anti-social behavior on the lower rings of the socio-economic ladder tends to result in consequences more severe than a good talking-to. But a whole heck of a lot of people who should know better—people who are old enough to be adults—can’t seem to tell the difference between real life and make-believe.

Some contend that the concept of God—a Divinity beyond human reckoning—is itself make-believe, though I’m not one of them. But whether or not God is a member of your inner circle isn’t the point. The point is that a generation of children who believe that the world, and their parents, revolves around them is going to have an awful hard time growing up. 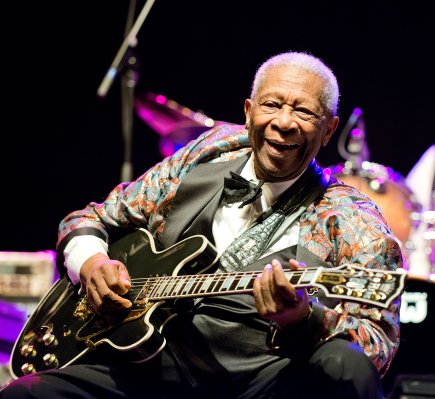 B.B. King Conjured the Very Soul of Our Country
Next Up: Editor's Pick