6 Simple Ways to Boost Your Metabolism

Throughout my years counseling clients I’ve seen many achieve fantastic weight loss results, including those who had not had success with other approaches, or thought they couldn’t possibly lose weight due to various circumstances, like being injured and unable to exercise, or being post-menopausal.

Based on my experience, I always believe that results are possible, but I’ve also learned that weight loss isn’t predictable or easy—and it certainly isn’t as simple as a “calories in versus calories out” equation. A new study from the National Institutes of Health (NIH) illustrated this and backs what I’ve seen in my own practice—one person’s metabolic response to eating less may not mimic another’s, due to biological differences.

NIH researchers studied a dozen obese men and women in a metabolic unit. The study measured the subjects’ calorie expenditures, both before and after a day of fasting, followed by a six-week phase during which they reduced their calorie intakes by 50%. After accounting for factors including age, sex, and starting weight, scientists found that those who lost the least weight during the reduced calorie period were those whose metabolisms decreased most during the one day fast. These people have what scientists refer to as a “thrifty” metabolism. The opposite results were also found: those with “spendthrift” metabolisms, which decreased the least during the fast, lost the most weight.

In a nutshell, the theory behind “thrifty” metabolism is that when faced with a sudden shortfall of food, some people’s bodies quickly compensate to conserve energy, by burning fewer calories. So if, for example, you went from eating 3,000 calories a day to 1,500, a thrifty metabolism would trigger a conservation mode, designed to shrink the calorie deficit. Historically, people with this adaptation were better able to survive during times of famine; but today, it presents a challenge for those trying to shed excess pounds. It’s also one of the reasons why simply slashing your intake by 500 calories a day isn’t a guarantee that you’ll shed one pound in a week (for more check out my previous post Why You Can’t Rely on Calorie Counts and Why Dieting Makes You Fat).

If you think you may be in this group, and your biology is making it tough for you to see results, don’t give up. Here are six things you can do to maximize your metabolism, and counter the effects of possible “thriftiness.” While your results may be slower than a “spendthrift” counterpart, losing weight isn’t an impossibility.

Natural substances in green tea—antioxidants called catechins, and caffeine—have been shown to help boost metabolism, and trigger increased fat burning. Aim for about five cups a day, the amount tied to a reduced risk of chronic diseases, including heart disease. Based on the research on how green tea impacts metabolism, this quantity could also translate into the loss of eight pounds over a year’s time.

In addition to naturally curbing calorie intake, water has been shown to positively affect metabolism. One German study found that drinking two cups (16 ounces) of water upped calorie burning by 30% within 10 minutes, and the effect was sustained for more than an hour. Shoot for a solid eight cups (64 ounces) daily, and if you dislike the taste, spruce it up with healthy add-ins like sliced cucumber, fresh grated ginger, mashed fruit, lemon, lime, basil, or mint.

We all know that veggies and fruits are nutrient rich, but research shows they may also impact leanness, due to their ability to help preserve metabolism-boosting muscle. In one study, University of Florida researchers found that when two groups consumed the same number of daily calories, those who ate more plant-based foods had smaller waist circumferences, and lower body fat percentages. Aim to eat produce at every meal. One simple formula is to include one serving of fruit in every breakfast and snack, and two serving of veggies in each lunch and dinner. For more about how to build meals around veggies check out my previous post 5 Perfect Pasta Alternatives.

More proof that a calorie isn’t a calorie came from research conducted at Pomona College. Researchers found that when healthy women consumed meals that were similar in terms of carb, protein, and fat content, they burned about 50% more calories eating whole foods versus highly processed foods. To reap this metabolism-boosting benefit, stick with foods as close to their natural state as possible. For example, rather than a turkey sub on a processed roll and a bag of baked chips for lunch, order a chopped salad made with greens and veggies, topped with lean protein and avocado. At snack time trade anything that comes from a package with a tennis ball sized portion of fresh fruit and a golf ball sized serving of nuts.

You know about beans—black, red, white…well, pulses are a unique food group that includes beans, as well as peas, like chickpeas, and split peas, and lentils. I made a daily dose of pulses a key strategy in the weight loss plan in my new book Slim Down Now, in part because they’re so filling, nutrient rich, and gluten free, but also because of their impact on metabolism. A review published in the British Journal of Nutrition concluded that pulses increase calorie and fat burning, and help reduce visceral fat, the deep internal belly fat known to up the risk of heart disease and type 2 diabetes. To bolster your metabolism, include a half cup of a pulse in one of your daily meals, like a side of black beans with your veggie avocado omelet, lentils in your lunch salad, oven-roasted chickpeas or hummus in a snack, or white bean and kale soup at dinner. You can even incorporate pulses into desserts! For more about pulses check out How to Keep the Carbs and Still Lose the Pounds.

Exercise itself can help boost metabolism, but according to a study published in the International Journal of Sport Nutrition and Exercise Metabolism drinking java before you get your heart rate up may further up your metabolic rate. Researchers found that compared to those who took in a placebo, athletes who consumed caffeine pre-exercise torched about 15% more calories for three hours post-exercise. The dose used in the study was 4.5 mg of caffeine per kilogram of body weight. That’s about 300 mg of caffeine for a 150-pound woman (68 kg), the amount in about 12 ounces of brewed coffee. For more about the benefits of coffee for exercisers, check out my previous post. 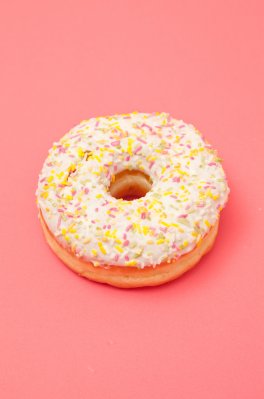 Trans Fats Are Hiding All Over Your Grocery List
Next Up: Editor's Pick