Why Did The Bachelorette Let Rape Jokes Air?

On Monday’s premiere of The Bachelorette, the reality show debuted its big twist. Instead of letting the woman choose her suitors as per the show’s usual formula, two women, Britt Nilsson and Kaitlyn Bristowe, would compete for the men’s attention. At the end of a cocktail party, 25 potential suitors would vote for whoever they would prefer to woo over the course of the season. It was a controversial move that turns the ostensibly woman-powered Bachelor spin-off on its head, giving all the control back to the scrum of men. But we were willing to give it a chance. Last night, though, The Bachelorette went too far, allowing misogynistic comments, threats of rape and wholly inappropriate behavior to slide in the name of a game and supposedly “good” television.

The premiere began with a cavalcade of handsome suitors heading into a cocktail party after staking their claim on either Britt or Kaitlyn. (You can read a full recap here.) These parties are usually where contestants tend to overindulge and last night was no exception. The main culprit was a man named Ryan M., a 28-year old “junkyard specialist” hailing from Kansas City, Mo. Ryan got wasted in primetime and sat in the shrubbery, heckling suitors who arrived, yelling, “You suck!” from the bushes. He then drunkenly escorted Britt outside for some one-on-one time, proceeding to hug her and touch her face until one of the other suitors distracted him with the promise of another drink. Then Ryan slapped Kaitlyn’s rear as she walked by and she scowled at him, but presumably because of the show’s set-up, she couldn’t just take the power into her own hands and kick him off. Instead, she just had to take it. Both women were rendered defenseless by the fact that they needed to earn as many votes as possible to stay on the show. As he stripped down for the pool, Ryan declared that he was, “Totally horned up.” And that’s not even the worst of it.

Finally another contestant confronted Ryan about his behavior, and Ryan replied, “Why am I not raping you right now? That’s my whole thing.” The other suitor looked horrified and called him out on it, causing Ryan to simply yell, “You suck!” and stumble onward. It was a shocking moment of literal — not implied — rape culture come to life on the small screen, with one drunken loser spewing horrible things on television. Still, the cameras just rolled and a producer in an editing booth somewhere decided to leave that clip in.

When producers finally had enough of Ryan’s antics, a giant Bachelorette bouncer sent him to speak to host Chris Harrison outside of the house. “I hate to do this, but you’re clearly not here for either one of these girls or for sincere reasons,” Harrison told the disgraced contestant. “I really think it’s best if you go home. There’s a car waiting for you.” And with that, Ryan was finally sent packing.

Good riddance, but let’s back up a second. While sending Ryan off, Harrison said, “I hate to do this.” Why would he hate do that? Seems like kicking off a man who got drunk, stripped, inappropriately grabbed one of the show’s stars and then threatened to rape another contestant would be the sort of person you should enjoy sending home. It would set a good precedent not only for future contestants, but also for the at-home audience. Instead, Harrison made it clear that they weren’t sending Ryan home for his inappropriate conduct, or for getting black-out drunk, but because “he wasn’t there for the right reasons.” That reasoning seems to imply that the show and its mission of following one of these women on their journey to find love, was more important than a man acting wildly inappropriately toward the women and threatening violence on national television. It makes it seem like the producers don’t care about his conduct as long as he was “there for the right reasons.”

While The Bachelorette is not the most feminist of franchises — there’s an ongoing discussion about the show’s perceived slut shaming — there was something refreshing about a woman choosing a partner on her own terms (well, terms worked out in advance with the producers). This season was already shaking things up by removing any sense of female empowerment from the show, by letting the women compete for the men’s votes. But after last night, it seems clear that the show has lost its way. Whether viewers are Team Britt or Team Kaitlyn, it’s unlikely that they are Team Misogyny. 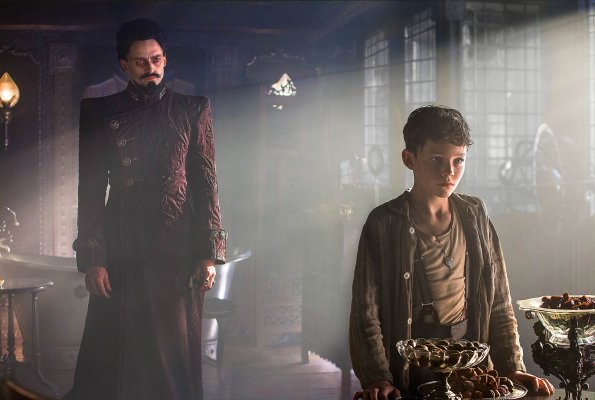 The Second Pan Trailer Shows Peter's Friendship With Hook
Next Up: Editor's Pick