The Bachelorette Recap: Kaitlyn, Britt and 25 of Their Closest Boyfriends

The Bachelorette is back! This season, the producers, in their infinite wisdom, decided to shake things up and have both Britt Nilsson and Kaitlyn Bristowe, who were winnowed from the herd of women looking for love with Chris Soules on the most recent season of The Bachelor, vie for the chance to pre-mate (in a hot tub!) on live television. Both women will be at the mansion to meet and greet a fresh batch of eager beaus. Then, instead of letting Britt and Kaitlyn fight over the men in a Thunderdome of Love, which would be uncivilized and one of them might break a nail or something, the men will choose who they will woo. Isn’t that nice of them?

As we wait to see how this new twist on an old formula unfurls, let’s scope out the competition. People to watch include Shawn E., an “amateur” sex coach from Ontario. Amateur as in he didn’t want to spring for the professional licensing fees? Or like he’s the ABD of the sex-coaching PhD set? Then there’s Josh, a 27-year-old law student who is putting himself through school as an exotic dancer (basically a “real” life version of Danny Castellano from The Mindy Project). On the other end of the sexy-job spectrum, there’s Ryan M., a junkyard specialist from Kansas City. There is also a healthy array of blokes with incredibly soporific-sounding jobs, like, investment bankers, former investment bankers, insurance agents, international auto shipperzzzzzz. Need to raise your heart rate after all that? Never fear, there are three trainers on hand. There’s also a healer in the mix, sure to use his talents to heal either Britt or Kaitlyn’s broken heart. Then there’s the guy who shows up at the mansion with a giant cupcake, which either Britt or Kaitlyn can drown their sorrows in if the men choose wrong.

Before the show begins, Chris Harrison reminds viewers that change isn’t easy and that we will all get through his awkward, painful process together. So pull out your favorite adult beverage, grab your Kleenex, sprinkle your couch with rose petals and get ready to walk hand in hand with either Kaitlyn or Britt on their journey to find love.

The Arrival: Britt and Kaitlyn awkwardly stand across from each other in the mansion’s rounded driveway, dressed in their sequins, sparkles and lip gloss, and side-eyeing each other like crazy. The limos pull up, and as the 25 men spill out, it’s clear that Britt is winning (or those sneaky producers want it to seem like Britt is winning) as all the men flock to her and Kaitlyn stands there like a fourth-grade nothing in gym class.

Team Britt: Jonathan an automotive spokesman (he speaks for the autos?) from Detroit with a 5-year-old son (or in Bachelor parlance, “baggage”). Brady, a singer-songwriter, who marries together pain and joy in his music, but hasn’t found love yet. He thinks Britt is a “solid billion” on a scale of 1 to 10. Ryan, a realtor, thought he was a Kaitlyn, but now is totally a Britt.

Team Kaitlyn: Joe from Bluegrass Country considers himself both a Southern gentleman and a hair-gel enthusiast. He kindly brought the ladies some moonshine to chug. Joshua, a welder who is rivaling Chris Soules for smalltown-hero status, makes a lot of puns about welding. Ian manages to mention that he is a Princeton grad in his intro video, but balances it out with a tragic backstory about getting hit by a car and left for dead. He tells Kaitlyn that he wants it to be her. Jared would prefer that we call him “Love Man,” as opposed to”restaurant manager with an asymmetrical haircut.” While he pronounced his love for Kaitlyn in his intro video, Love Man chose to neg her, stepping out of the limo and only talking to Britt. JJ, the former investment banker, told Kaitlyn that as a lifelong hockey fan, he wants to “puck her” and handed her a puck. While Britt liked Shawn, one of the personal trainers, he told Kaitlyn he was there for her. Tanner, an auto-finance manager, gives Britt a box of tissues to dry her impending tears, but mostly to be mean, because he’s Team Kaitlyn.

Team TBD: Josh, the law student, considers being an exotic dancer “the best job on earth,” which it is when compared to corporate litigation. He performs a sultry strip down for the ladies, which causes Kaitlyn to happily hand him over to Britt. Ben is a personal trainer whose life highlight is that he got to try out for the NFL — not play, just try out. Chris, a dentist, pulls up in a car shaped like a cupcake to woo the sweeties. Tony, the healer, showed up with a black eye, which he apparently couldn’t heal before the show. He feels like he has been training for this moment his entire life. While he came for Kaitlyn, he is won over by Britt and now feels “energy pulsating” with Britt’s name on it. Clint, an architectural engineer, who took styling tips from Thor. Ben H., a software salesman from Denver, David, a real estate agent from Orlando, Kupah, an entrepreneur from Boston, and Corey and the Cory, the Bens, Shawns, and Ryans are all blending into a crowd of spray tans, white teeth and implied cologne.

The Scandal: Kaitlyn ran inside the mansion to say hello to the men. Britt thought that was cheating. The end.

The Drunk: Every opening night there is someone who can’t hold their liquor. This time it’s Ryan M., the junkyard specialist from Missouri. Not only did he get completely blitzed, but he came outside the mansion, sat in the shrubbery and heckled Shawn E, the amateur sex coach, who had the brilliant idea to pull up in a hot-tub car. That’s right, a hot tub inside a car. The ladies were dying of laughter, but Ryan kept yelling “stupid!” like if Statler and Waldorf lived in a bush and were idiots. Later, Shawn tried to talk to Ryan about it, not realizing he was black out drunk and beyond help. Then he drunkenly touched Britt’s face and slapped Kaitlyn’s rear. Then he stripped down into his skivvies to take a dip in the pool while yelling, “I’m so horned up!” Finally a security guard showed up to taken Ryan to the principal’s office. The principal being Chris Harrison, who sent him home to think about what he’s done.

Bachelorette Milestone: Chris Harrison came into the mansion and told the group that Ryan was sent home, not because he was drunk or inappropriate, but because he wasn’t there for the right reasons.

The Cocktail Party: Kaitlyn kicked things off with a knock-knock joke (“Knock knock!” “Who’s there?” “Two Bachelorettes!” “Two Bachelorettes who?” “Two Bachelorettes, that’s the joke!”) while Britt tried not to cry while telling the room that she’s looking for a best friend. It’s an awkward evening. As Britt and Kaitlyn mingle with the menfolk, they can’t help but glance over their shoulder to see who is taking a shine to the other woman. The men are inside strategizing. Do you take the one you like most or the one who likes you the most? Thor (a.k.a. Clint) won Kaitlyn’s heart by handing her a picture he drew of Chris Harrison riding a triceratops.

The Voting: Chris Harrison kills the vibe in the cocktail party by announcing that the voting room is open, and the men must choose. The women get slightly panicked looks in their eyes, but try to swallow it down to continue their flirting and run their own personal get-out-the-vote drive fueled by eyelash batting, sweet smiles and sultry looks. The men slowly file into the voting room and drop their roses into a box under either Kaitlyn’s or Britt’s glamour shot. Some men went with their guts, some went with lower body parts, some (the investment bankers) did their due diligence before making their decision.

Best Reason to Come Back Tomorrow: The roses are tallied, and one of these women will be The Bachelorette. 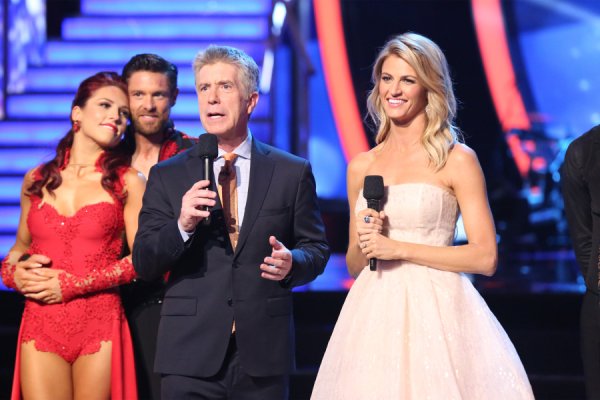 Dancing With the Stars Recap: Last Dance, Last Chance
Next Up: Editor's Pick