Dear Graduate, Here's What Nobody Told You

This is a big milestone moment. I hope you’re proud of all you accomplished. You did good, kid.

Graduation brings up a bag of mixed emotions — the same way that moving away from home, or getting married or having a child does. You’re proud and excited, but you’re also thinking, What on earth did I get myself into? You may even feel like an animal that has wandered onto the highway. You see your future rushing toward you, but you’re paralyzed. You know you have to pick a direction and move, but all you can think is, S—, now what?

Now what, indeed. You’re supposed to know what’s next, right?

The truth is, you’re not supposed to know what the future looks like. Nobody does. Why didn’t anybody tell you this? Because life, post-graduation, is scary as hell, that’s why. And 10 and 20 years from now, it will be just as scary as it appears on graduation day.

That’s right: All of us out here in the working world are scared, too. We’re just better at faking it. We’re mucking it out, trying to find our way as best we can. We have doubts and fears and questions. So many questions. Just like you.

Maybe this comes as a surprise to you. Well, the jig is up. The secret is out: Nobody knows what the hell they’re doing. We’re all just winging it.

Even the people who look like they have their s— together don’t have their s—t together, at least not all of it.

Believe it or not, this is a good thing. It evens the playing field and changes the rules. If we’re all just winging it, we don’t need a flawless master plan. We don’t have to have it all figured out to take a shot.

So, take heart: There’s no need to have the future mapped out before you get to work. The best you can do is realize what it is that you hate doing, versus what makes you happy, and know enough to make a career of the latter. If that project you’re pursuing sparkles, go after it with your whole heart. If it feels oppressive, run like hell.

This career thing is less like a straight shot on the freeway, and more like a meandering path through the woods. There are twists and turns, and hills and valleys, and puddles and sunshine. You may even occasionally circle right back to where you started, and that’s okay. That’s life.

You will find your way.

But here’s how the rest of that story: You survive. You thrive. You pay attention to the little signs along the way. You learn from mistakes. You gather up your lessons and keep on truckin’. You try again. You do better. You get one step closer.

Then, when you’re finally out of the woods, you breathe deeply and soak up the sunshine. It feels so good to finally arrive. Life feels like a big open meadow, yours for the taking. You’ve made it. Enjoy it. Drink it in.

Yet, after a while, you’ll miss the mystery of the woods. You’ll long for adventure. You’ll want to go somewhere else — somewhere you haven’t been before. There’s so much to see and do, and your time here is short. So, you’ll pack up and take off. You won’t know where, just that it’s time to go. Maybe you’ll find yourself back in the woods; maybe you’ll climb. Who knows?

Life is like that: a series of mountains and meadows and walks in the woods. Make your own journey a good one, and find the strength to choose your own path. 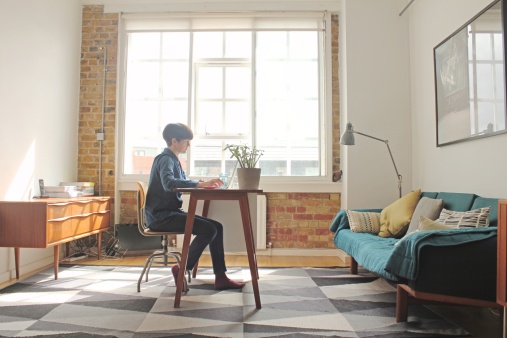 These Are the Best Jobs You Can Do In Your Pajamas
Next Up: Editor's Pick