Game of Thrones Watch: The Game of Faces

If you think about it even just a little, Jaqen H’ghar is right: No one in Game of Thrones ever really stops playing the game of faces. And those who do certainly don’t survive very long. It’s strange that it’s a lesson Arya has struggled to learn ever since entering the House of Black and White. On at least a basic level, it’s a game that the youngest Stark daughter has been forced to play ever since Joffrey took her father’s head. But, as Jaqen H’ghar and The Waif are all eager to prove, simply cutting your hair and pretending to be a boy does not make you worthy of joining the Faceless Men.

It’s hard to know precisely how long Arya has been scrubbing corpses by the time she confronts The Waif in the episode’s opening minutes, but Maisie Williams’ hair is certainly a bit longer and she seems to have grown at ease with the process. We get a great shot of her rapping her thumbs along the scrubbing table as her most recent patient is taken away, but learning what happens to the bodies clearly isn’t knowledge acquired simply through impatience. Demanding of The Waif that she get play the game of faces doesn’t appear much more effective. The Waif spins Ayra an entire tale about her own troubled childhood in Westeros that ended with the murder of her evil step-mother. As The Waif concludes her tale, a faint grin appears along Arya’s lips — one that rather resembled her initial reaction to meeting Brienne in last season’s finale. Just as quickly as that inspiration was given and taken away, however, this one was was as well when The Waif asks if Arya believed her story.

When Jaqen H’ghar later tests Arya’s readiness, it’s clear she’s still ill-prepared to join his ranks (and revealingly was struck several times for claiming that she hated The Hound). But Arya Stark is not one to be easily deterred, and sees the opportunity to simultaneously practice her lies and impress Jaqen when she convinces a terminally ill girl that drinking the water from the enchanted pool will heal her rather than kill her. It’s a cold, calculated moment from Arya, but certainly not one particularly out of line with what we’ve come to expect. Whatever Arya has always lacked in skill, she’s more than made up for in sheer determination. It’s that determination that convinces Jaqen to lead her down to a dungeon filled with enough dead faces to last another dozen seasons of The Walking Dead. “A girl is not ready to become no one,” Jaqen tells her as she gazes at the faces. “But she is ready to become someone else.”

Sansa Stark has spent much of the last season-and-a-half attempting to become someone else as well. She pretended to no longer be a Stark, dyed her hair black, and hitched her wagon to Lord Baelish. And for as long as Littlefinger was around to protect her, it was a rather successful endeavor (manipulations and tenuously-accepted advances aside). But with her true identity revealed, her dyed hair stripped from her head by her betrothed’s psychotic mistress and Baelish back in King’s Landing, Sansa was left an ultimately powerless teenage girl — certainly no match for the savagery of Ramsay Bolton. Their wedding ceremony was every bit as ominous as expected, though compared with previous weddings attended by the Starks and Bolton’s, it was a rather tame affair (and the band likely asked to skip its rendition of “The Rains of Castamere.”)

What followed, however, was an entirely different story. With Reek forced to watch, Ramsay stripped Sansa and raped her. It was a brutal, uncomfortable scene that almost certainly had viewers pleading with their screens and cursing them after. It’s hard to imagine anyone making Joffrey seem like a superior mate, but David Benioff and D.B. Weiss have spent a great deal of effort making that possible for Ramsay. Let’s hope his demise is equally horrible.

Things certainly seem headed in perilous direction for Margaery and Loras Tyrell. For as long as we’ve known him, Loras Tyrell has been tasked with keeping his sexuality a secret, but he has grown increasingly careless as the seasons have dragged on, as though playing this particular game of deception was no longer of any concern to him. It certainly will be now. The subject of an inquest into his alleged crimes, Loras categorically denies all the charges against him, and Margaery gamely backs him up. Their claims are rendered moot once Olyvar enters the High Sparrow’s interrogation room, revealing to the assembled everything he knew about Chekov’s Dorne-shapped tattoo. Loras and Margaery are summarily dragged off by the Sparrows as the latter cries out for Tommen to stop them. The boy king proves just as useless as he’s shown himself to be since ascending to the throne, sitting there dumbfounded as his wife is dragged off.

To a certain extent, it’s a rather stunning development. It would have been a good bet that Olenna Tyrell’s arrival in King’s Landing would have turned the tides back in Highgarden’s favor. Her meeting with Cersei was going just about as expected (the “Famous tart” quip was one of her finest) until Olenna allowed the Queen Regent to have the final word. You could easily be forgiven for expecting that the Tyrell matriarch had something up her sleeve for the inquest, but all she could do as her grandchildren were dragged away was shout objections. Now it’s possible that Olenna underestimated Cersei, but it’s a better bet that she overestimated her. Tywin never would have attempted (or allowed) such a bold ploy. Not only do the Lannisters need the Tyrell’s men, gold and wheat, but it’s not as though Cersei isn’t hiding a few secrets that the Sparrows wouldn’t approve of as — and Olenna Tyrell seems like just the sort of woman who’d know how to handle an overplayed hand.

Perhaps at some point, Cersei can compare notes with Ellaria Sand on just that topic. Prince Oberyn’s former mistress unleashed her Sand Snakes on Myrcella Baratheon at the worst possible moment. The trio arrived on scene right as Jaime and Bronn were attempting to exfiltrate Myrcella from the Water Gardens. The brief tussle was interrupted by Areo Hotah and his men, who had been sent by Prince Doran to protect Myrcella and Trystane. Moments later, Ellaria found herself surrounded by a dozen unfriendly spears. Making her intentions known so plainly might have been a bad move.

The lesson that Arya is attempting to learn (and the one that Game of Thrones’ most successful characters already have) is that you don’t necessarily need to become no one, you just need to become anyone who isn’t truly you. That can mean changing your face or your name or your allegiances or your intentions, just so long as no one quite understands what you’re doing. After more than four-and-a-half seasons in Westeros and Essos, we’ve learned that the game of thrones isn’t the only one where the two options are winning and dying. 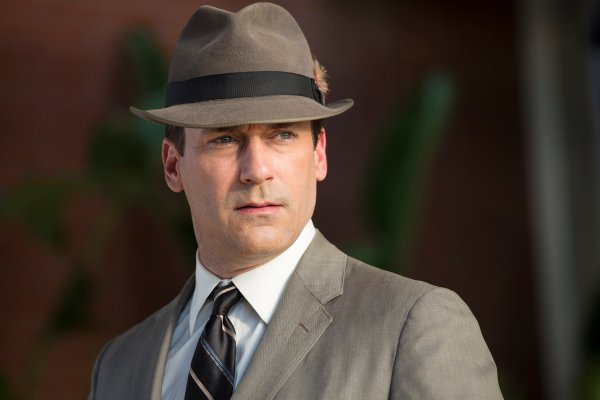 How the Mad Men Finale Put the Don Draper Death Rumors to Rest
Next Up: Editor's Pick