Snapchat CEO Evan Spiegel to Grads: 'This Is the World We Were Born Into, and We Are Responsible for It'

Dean Ellis, honored guests, faculty, family, friends, and the Class of 2015: I cannot begin to express my gratitude for your generosity. Thank you so much for inviting me to join you in celebrating your graduation day! Three years ago I could never have comprehended such an opportunity. Thank you, thank you, thank you.

About three years ago today I was right where you are. I was sitting in a folding chair, just like that one, wearing my cap and gown, waiting to walk on stage. But I wasn’t graduating. When they shook my hand and took my picture, they handed me an empty folder. You see at Stanford they let you “walk” through graduation even if you haven’t actually finished the requirements necessary to receive your diploma. You get to pretend you are graduating just like everyone else, even though you aren’t. The University had created this alternative for students who were using the summer term to finish up their degrees. I was using it because I was embarrassed, and I didn’t want to be left out of the celebration. What was I going to do? Stay in my dorm room while all of my friends processed into the stadium and tossed their caps into the air without me? So I sat in the hot sun and listened to Cory Booker speak for what felt like quite a while, and I waved to my family who had traveled all the way to watch me not graduate. By the way, hi Mom!

It only recently occurred to me, while preparing this address, how totally absurd this whole charade was. It reminded me that oftentimes we do all sorts of silly things to avoid appearing different. Conforming happens so naturally that we can forget how powerful it is – we want to be accepted by our peers – we want to be a part of the group. It’s in our biology. But the things that make us human are those times we listen to the whispers of our soul and allow ourselves to be pulled in another direction. Conformity is so fascinating and so pervasive that it has been studied for a very long time. It turns out there are two things that can dramatically reduce conformity in a group setting. The first is a single dissenting voice. The second is the ability to communicate privately with other members of the group. Our government gives us the right to privacy and the right to express ourselves freely in the hope that we might mitigate conformity. Democracy wasn’t designed to promote popular thought. It was architected to protect dissent. For, as President Kennedy said, “Conformity is the jailer of freedom and the enemy of growth.”

I recently fell in love with a story about a great piece of American art. It’s about Bob Rauschenberg. When he was a young artist, he went to visit his idol Bill de Kooning. He was terribly nervous, clutching a bottle of Jack Daniels, for liquid courage, because he wasn’t just visiting. He was there to ask de Kooning for one of his drawings. Bill de Kooning knew just what he was up to – Rauschenberg had recently been experimenting with his own work. He had been creating paintings and then erasing them. But that wasn’t enough. He didn’t want to erase his own work, he wanted to erase the work of his hero. So de Kooning obliged but he took his time, torturing the young artist as he wandered around the studio selecting a piece. He wanted to find a piece that he really loved. As he thumbed through his portfolios, he found one that was particularly hard to erase, comprised of layers of lead and charcoal. He gave it to Rauschenberg. According to Bob, it took nearly two months to erase the drawing. It was Jasper Johns who framed the drawing and gave it a title, “Erased de Kooning by Bob Rauschenberg.” It was Jasper Johns who recognized that in the process of erasing de Kooning’s drawing, Rauschenberg had in fact created something new, his own work of art.

I love this story because Bill de Kooning had the humility to recognize that the greatest thing we can do is provide the best possible foundation for those who come after us. We must welcome our own erasure. I’m asked one question most often: “Why didn’t you sell your business? It doesn’t even make money. It’s a fad. You could be on a boat right now. Everyone loves boats. What’s wrong with you?” I am now convinced that the fastest way to figure out if you are doing something truly important to you is to have someone offer you a bunch of money to part with it. The best thing is that no matter whether or not you sell, you will learn something very valuable about yourself. If you sell, you will know immediately that it wasn’t the right dream anyways. And if you don’t sell you’re probably onto something. Maybe you have the beginning of something meaningful. Don’t feel bad if you sell out. Just don’t stop there. I mean shucks, we would have sold our first company, for sure. But no one wanted to buy it. When we decided not to sell our business people called us a lot of things besides crazy – things like arrogant and entitled. The same words that I’ve heard used to describe our generation time and time again. The Millennial Generation. The “Me” Generation. Well, it’s true. We do have a sense of entitlement, a sense of ownership, because, after all, this is the world we were born into, and we are responsible for it.

The funny thing about “Erased DeKooning” is that it isn’t for sale. It’s safe and sound in the San Francisco Museum of Modern Art. It’s tremendously valuable, but it bears no price. You already have inside of you all of the amazing things you need to follow the dreams that you have. And if you get stuck along the way there’s a ton of free information available on the Internet. Have faith in yourself and the person you are going to become. Know that you are capable of all of the growth that will be expected of you and that you expect for yourself. You will tackle every challenge headed your way – and if you don’t – it won’t be for lack of trying. Someone will always have an opinion about you. Whatever you do won’t ever be enough. So find something important to you. Find something that you love. You are going to make a lot of mistakes. I’ve already made a ton of them – some of them very publicly – and it will feel terrible, but it will be okay. Just apologize as quickly as you can and pray for forgiveness.

When you leave, here you’re going to face a great challenge: a full-time job. The hardest part is going to be getting used to solving problems that don’t yet have answers. In times of despair, you may believe the cynic who tells you that one person cannot make a difference – and there are times it may be hard to see your own impact. I beg you to remember that it is not possible at this time or any time to know the end results of our efforts. That is for our God alone. Please voice your dissent, anticipate your erasure, and find something you aren’t willing to sell. Congratulations to the class of 2015! Go get ‘em! 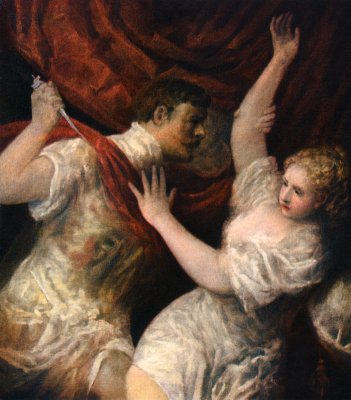