Sitting in a hotel conference room of a Scottsdale, Ariz., resort, Mike Huckabee kibitzed with a few reporters Friday about issues ranging from the Iraq War to the suspension of New England Patriots quarterback Tom Brady.

But when the talk turned to whether undocumented immigrants should have a path to U.S. citizenship, the former Arkansas governor clammed up. “Until we have a secure border,” Huckabee demurred, “there isn’t any other discussion for us to be having.”

Huckabee isn’t the only Republican presidential candidate to dodge the topic lately. As the 2016 race ramps up, GOP candidates are increasingly skirting the specifics of immigration policy. It’s a trend that threatens the party’s hopes of reclaiming the White House.

Routed in the battle for Hispanic voters in 2012, the Republican Party promised to speak differently about immigration this time. But the need to repair its relationship with Latinos has collided with its candidates’ need to court the conservative activists who dominate the GOP nominating contest. As a result, many of the party’s presidential hopefuls don’t want to divulge the details of their positions on an issue with major political and policy ramifications.

To discern the differences between the candidates on immigration, TIME distributed a brief survey to declared and likely White House hopefuls. The questions focused on the fate of the estimated 11 million undocumented immigrants currently in the U.S., a subject at the heart of the bipartisan debate over comprehensive immigration reform:

Some likely GOP candidates offered clear and succinct answers. Former Pennsylvania Sen. Rick Santorum was a “no” on all four, according to his spokesman. South Carolina Sen. Lindsey Graham, one of the architects of the Senate’s bipartisan attempt to overhaul U.S. immigration laws in 2013, stuck by his support for a path to citizenship under detailed conditions. “Citizenship need not be mandatory, but it needs to be an option for those who are qualified,” said Graham spokeswoman Brittany Bramell. Graham also backed a process to give legal status or citizenship—along with government benefits like in-state tuition—to minors brought to the U.S. by their parents.

But the majority of the field offered muddier responses, or declined to answer at all. Louisiana Gov. Bobby Jindal was one of several to argue the debate should be postponed until the southern border is secured.

“Any discussion about dealing with who is already here is counterproductive until the border is secure,” Jindal told TIME in a statement issued through his spokesman. “Any attempt to deal with the millions of people who are currently in this country illegally prior to securing the border is illogical, and is nothing more than amnesty.”

Asked about a pathway to legal status for undocumented workers who met certain conditions, Jindal dismissed it as “a hypothetical conversation.” As for legal status or citizenship for those brought to the U.S. as minors, Jindal turned the focus to Obama. “A serious discussion about those individuals is just not possible right now because of the reckless policies of this administration,” he said. “This President has done everything he can to encourage illegal immigration.”

Texas Sen. Ted Cruz, whose path to the GOP nomination runs through the conservative grassroots, opposes a path to citizenship for the undocumented. But it’s unclear where Cruz, who casts himself as a proponent of immigration reform, stands on the matter of legal status. He did not directly answer questions from TIME at a recent question-and-answer session hosted by the U.S. Hispanic Chamber of Commerce.

These evasions reflect the divisiveness of a topic that splits the party’s bigwigs and its base. The fate of the estimated 11 million undocumented immigrants currently in the U.S. is such a freighted question among conservative activists in early voting states like Iowa that White House hopefuls are leery of sinking their campaigns with a single slip of the tongue.

Take former Texas Gov. Rick Perry, who is likely to launch his second campaign for the presidency next month. Many recall the brain freeze Perry suffered in the middle of a 2011 debate as the moment his first bid for the White House went awry. But the face plant capped a free fall set in motion at an earlier debate, when Perry excoriated critics of in-state tuition breaks for undocumented minors. “If you say that we should not educate children who have come into our state for no other reason than they have been brought there by no fault of their own,” Perry argued then, “I don’t think you have a heart.”

Perry takes a different tack now. In response to TIME’s questions, a spokesman for the former Lone Star State governor compiled a summary of his tough record on illegal immigration, including a “border surge” to stem the tide of undocumented immigrants from Central America in 2014, an increase in border-security funding and a mandate for state agencies and contractors to use e-verify, an electronic system designed to prevent employers from hiring undocumented workers. “Under Gov. Rick Perry’s leadership, Texas did more to secure the southern border than any state in the nation,” said spokesman Travis Considine.

Perry isn’t the only Republican to recalibrate his approach. Wisconsin Gov. Scott Walker has shifted on immigration more than any other GOP candidate. Once a supporter of a path to citizenship, Walker is now a firm no. “He believes citizenship should be reserved for those who follow the law from the beginning,” spokeswoman AshLee Strong told TIME. Asked if Walker supported an eventual pathway to legal status for those in the U.S. illegally or a separate process for undocumented immigrants brought to the U.S. as minors, Strong replied: “He believes that following the President’s illegal executive action, the U.S.’s priorities must be repealing the executive action, securing the border, and enforcing the laws on the books while implementing a workable e-verify system.”

Florida Sen. Marco Rubio, who helped craft the 2013 Senate measure, has edged away from his support of a comprehensive reform bill; he now says he would support a path to citizenship only after tough border measures are imposed first. Former Florida Gov. Jeb Bush, a fluent Spanish speaker whose wife is from Mexico, is a supporter of immigration reform who has urged the party to rethink its approach on immigration. But while he once spoke favorably about a path to citizenship, he prefers a path to earned legal status.

“Governor Bush believes once immigrants who entered illegally as adults plead guilty and pay the applicable fines or perform community service, they should become eligible to start the process to earn legal status,” spokeswoman Allie Brandenburger told TIME. “Such earned legal status should entail paying taxes, learning English, committing no substantial crimes, and not receiving government benefits. Governor Bush believes this must be accompanied by measures to secure the border and reform America’s broken immigration system to make it economically driven.”

Candidates like Bush and Rubio are trying to navigate the tightrope on a tricky policy issue by taking a position that can win over moderate voters (including the center-right business community, which favors reform) without alienating the GOP base. Their position grew more precarious recently, when likely Democratic nominee Hillary Clinton, vying to maintain the party’s grip on the nation’s fastest-growing demographic group, positioned herself as a greater advocate of undocumented workers than anyone in the field.

“We can’t wait any longer for a path to full and equal citizenship,” she said, claiming Republican candidate has consistently supported that policy. “When they talk about ‘legal status,’ that is code for second-class status.” 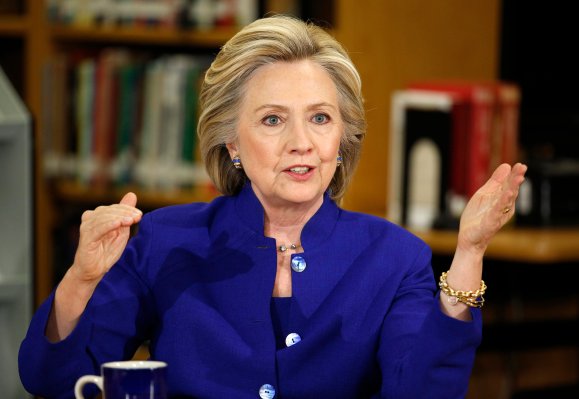 Hillary Clinton Draws Distinction With GOP on Immigration
Next Up: Editor's Pick