President Barack Obama just concluded a two day summit with America’s Arab allies. The meeting wrapped up a rocky week that started when Saudi Arabia’s King Salman publicly withdrew from the summit and sent his son and his young nephew in his place. These 5 stats explain the tense relationship between the U.S. and its Persian Gulf allies, and the challenges those alliances will face going forward.

Bahrain, Kuwait, Oman, Qatar, the United Arab Emirates and Saudi Arabia comprise the grouping of monarchies in the Persian Gulf known as the Gulf Cooperation Council (GCC). They are all major oil producers, with Saudi Arabia the heavyweight of the lot. Together they account for 24% of the world’s crude oil production. But after decades of critical dependence on their oil, America, thanks largely to the mid-2000s shale boom, has surpassed Saudi Arabia and Russia to lead the world in oil production. The GCC has felt this acutely—Saudi Arabia saw its oil exports to the US plummet 23.74% between 2008 and 2014. The Saudis are not content to take this lying down. Riyadh is busy ramping up its own production (achieving a record high of 10.3 million barrels per day this past April) in an effort to drive down oil and price more expensive U.S. shale producers out of the global market.

2. The Paradox of Plenty

While Saudis are increasing production largely to strengthen their long-term market position, the gambit poses significant short-term risks. Oil prices had already been tumbling for months, and the price of oil directly affects economies like that are heavily reliant upon the commodity. 45% of Saudi Arabia’s GDP comes directly from oil and gas, 40% of the UAE’s, and around 50-60% each for Qatar, Kuwait and Oman. By keeping production high, Saudi Arabia is helping to keep oil prices low.

Economists often talk about the “resource curse,” when a country’s abundance of natural resources stunts the rest of its economy. In a healthy and balanced economy, the private sector should drive research, development and innovation. But only 20% of Bahraini nationals work in the private sector. The rest of the GCC are worse: a pitiful 0.5% of UAE nationals have the misfortune of private employment. The GCC countries have relied so long on oil that their workforces can’t compete in a globalized world. The ruling powers are keenly aware of this fact.

The GCC countries had a front-row seat to the Arab Spring. Beginning in 2011, countries throughout the Arab World erupted in demonstrations and protests, even bleeding into Bahrain and Kuwait. One of the main drivers of the movement was mass unemployment, which afflicts the affluent GCC as well. Ernst & Young estimates that unaddressed unemployment of youths aged 20-24 could eventually reach 40% across GCC member states. Those are numbers ripe for revolution.

The only thing scarier than the uprisings to the Gulf monarchs must have been the U.S. response to them. For years the understanding was that so long as the Gulf countries would keep the world market flush with oil, the U.S. would provide them with protection. Egypt had a variation of this type of relationship with Washington, but Obama wasted little time in throwing Hosni Mubarak under the bus in 2011—at least as the GCC see it. If Egypt could be sacrificed at the altar of democracy, why couldn’t Saudi Arabia be next?

4. The Threat of Iran

Looming over the GCC Summit is America’s reengagement with Iran. Washington’s greatest leverage over Tehran is the possibility of lifting sanctions in exchange for a nuclear deal. Experts estimate that Iran’s economy could grow anywhere from 2% to 5% in the first year after lifting sanctions, and then 7-8% the following 18 months. Those are rates on par with the remarkable growth of the ‘Asian Tigers’ in the 1990s.

It’s not just the additional economic competition that worries the GCC. Saudi Arabia has spent the better part of the last decade combatting Iran’s influence across Lebanon, Iraq, Syria, Yemen, even Bahrain—the end of sanctions would give Tehran additional financing to escalate the regional rivalry. Further destabilizing the region are serious threats posed by groups like ISIS. This is why the GCC sought a formal, Japan-style security alliance with the U.S. The leaders who showed up in Washington couldn’t get the pact they wanted—a treaty requiring Congressional approval is a nonstarter—but they did get assurances of America’s continued military support and significant arms sales.

The absence of the Saudi king, along with his counterparts from the UAE, Bahrain and Oman, sent the message that the status quo in the Middle East cannot continue. Their snub of Obama was intended to project an image of strength in the region. But the reality is that the oil-dependent GCC countries have serious structural problems that will take generations to solve. Instead of dealing with four rulers with an average age of 75, Obama sat across from representatives with an average age of 56. This younger generation is poised to lead their countries for decades to come. After 70 years of intense engagement, it is clear that the GCC countries need America as much as ever. The question is how much America needs them. 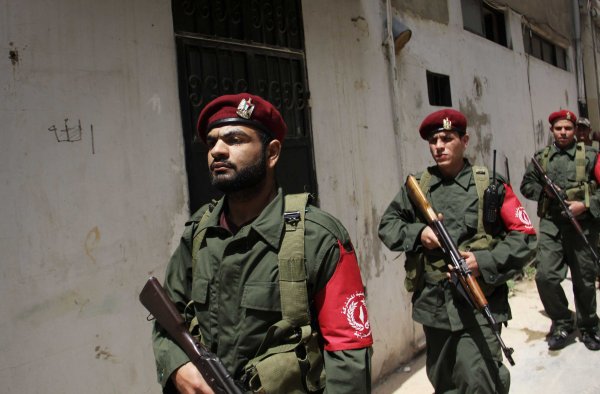 Palestinians Created Force to Fend off ISIS
Next Up: Editor's Pick