An Israeli soldier looks at a tunnel exposed by the Israeli military near Kibbutz Ein Hashlosha, just outside the southern Gaza Strip, Oct. 13, 2013.
Amir Cohen—Reuters
By Karl Vick

The discovery of yet another concrete tunnel reaching into Israel from the Gaza Strip has alarmed the Israeli military, now increasingly fearful of an ambush by militants attacking from underground. The latest tunnel, discovered late last week, was revealed on Tuesday to be the longest yet, reaching almost half a mile into Israeli territory.

It was also the fourth discovered in the last 18 months, and was unearthed, like others, by chance —in this case after heavy rains washed away topsoil, exposing concrete noticed by an Israeli farmer. Hamas, the militant Palestinian group that governs Gaza, acknowledged ownership and military intent. Lined with concrete and outfitted with electric lights and ventilators, the passage was tall enough to allow dozens of fighters to emerge inside Israel in a matter of minutes, perhaps to swarm nearby kibbutzim, overrun lightly manned military posts and kidnap local residents or soldiers.

“The possibility of a multi-pronged attack is the nightmare of every commander along the Gaza fence,” a senior officer in the Israel military’s southern command tells TIME.

Israeli officials acknowledge they have no firm idea how many other tunnels may be in place under the 24-mile southern boundary of the Palestinian enclave. Efforts to detect tunnels using technology have so far failed. Under Hamas, more than 1,000 tunnels were dug beneath Gaza’s six-mile western border with Egypt, mostly for the transfer of goods. Since the overthrow of the Egyptian Muslim Brotherhood government in Cairo, the tunnels have been mostly shut down. But on the Israeli border, Hamas is increasingly looking underground for a military advantage, especially since the 2006 capture of Gilad Shalit. He was seized by militants who emerged from a tunnel that came out behind the tank where Shalit and two others soldiers (both killed in the encounter) were stationed, facing toward Gaza. After being held for five years, he was exchanged for the release of 1,027 Palestinian prisoners by Israel–the single unvarnished triumph scored by Hamas in seven years in power.

“The tunnels we are inaugurating today are the new Hamas strategy in the war against Israel—the strategy of the tunnels,” Hamas Prime Minister Ismail Haniya announced on Sunday at a rally marking the ten-year anniversary of Israel’s assassination of Sheik Ahmed Yassin.”From below ground and above ground, you, the Occupiers, will be dismissed. You have no place in the land of Palestine… What the resistance forces are preparing secretly for the next confrontation with Israel is beyond imagination for Israel.”

Israeli officials say they take the threat seriously. The Israel Defense Forces are working from scenarios that range from kidnapping a soldier to the armed takeover of a nearby kibbutz, and everything in between, including combined and parallel attacks. The military operates on the assumption that Hamas would not waste the element of surprise by using the tunnel in a small scale skirmish, but rather with a significant, spectacular ambush.

“If as a result of an attack by fifty Hamas combats coming out of the tunnels, twenty five people, among them children, will get killed in one of the Israeli villages close to the borders, that is going to be an event that will strike the Israeli society in shock,” says one Israeli military source. “This will be the Hamas achievement.”

The understanding is based in part on the fact that Hamas would only act boldly if it chose to discard the cease-fire it has enforced in Gaza since November 2012, when Israel carried out an offensive dubbed “Operation Pillar of Defense.” In the logic of “resistance,” the group would need something substantial — numerous Israel casualties, for instance – in order to claim victory in the face of what would surely be massive retaliation from Israel.

With that in mind, Hamas has taken great pains to keep the underground channels secret from the prying eyes and ears of Israeli intelligence, always substantial in Gaza. In October, after Israeli troops discovered a mile-long tunnel, Haniyeh said “thousands of heroes have been working in silence, below ground, to prepare for the coming battles in Palestine.” But an Israeli official says that in the interests of operational security in fact only about 100 fighters are involved, carefully vetted from Hamas’ military wing. Precautions around the digging itself sound like scenes familiar to prison escape movies: The work is slow, in order to prevent detection by Israeli surveillance. In any given moment only between five to seven people work underground, says the Israeli official. The waste and dirt are evacuated in sacks and boxes in order not to raise suspicion.

The official says the tunnel typically starts a few hundred meters from the fence, inside a house or chicken coop owned by Hamas supporters, who give their consent and receive compensation. (The Israeli military located a tunnel originating in the side room of a mosque, apparently on the assumption that Israeli forces would not attack a holy place.) The depth at the entrance runs to a depth of 18 to 20 meters. As the diggers proceed, engineers follow pouring concrete to reinforce the walls and the ceiling. The electricians follow later, installing lights, and ventilation. Communication lines are also spread along side the tunnel in order to enable communication between the various parts of the tunnel, in the absence of a cellular reception, which at any rate, would be vulnerable to interception by Israeli’s signal-intelligence services.

If the digging goes well, without cave-ins from the sandy soil or flooding from groundwater, a 1,500 meter (nine-tenths of a mile) tunnel can be dug in nine to ten months. That said, the Israeli sources noted that one of the tunnels discovered was dug over two years. The final third, perhaps 500 meters, extends into Israel, but stops several meters short of the surface, in order to be breached when the order is given for offensive action.

That order would be carried out by special forces Hamas has trained specifically to operate from the tunnels, according to Israeli officials. Their target is presumed to be civilian enclaves such as Kibbutz Ein Ha’shlosha, which stands near the “mega-tunnel” discovered in October. But the presumption is based on the tunnels already known. In recent years Israel’s renowned military research establishment has found an apparently effective defense for the rockets militants long have fired out of Gaza – the Iron Dome anti-missile system. But for two decades the quest for a technology that will detect what Maj. Gen. Sami Turgeman of the Israeli army’s southern command this week called “these infernal tunnels” has come up dry. 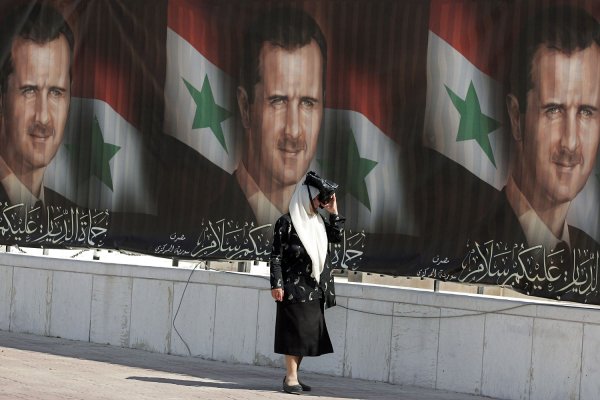 Syria Gears Up for Sham Elections
Next Up: Editor's Pick