Morning Must Reads: May 15

Good morning from Scottsdale, where the Republican National Committee is holding its spring meeting. Eight months away from the Iowa caucuses, the Republican Party is bracing itself for a greatly intensified primary next year, with many operatives predicting a drawn-out delegate fight to the nomination. The key cause: a crowded and unusually talented field that is bolstered by unlimited sums from super PACs. But party efforts to condense the primary calendar after 2012 may have made the situation worse for the GOP.

On the trail: On Saturday, 11 potential and actual Republican candidates will gather for the latest cattle-call at the Iowa GOP’s Lincoln Dinner in Des Moines, with candidates limited to 10 minutes of speaking time each—which means the 5:30 p.m. dinner will be lucky to end by 10 p.m. Meanwhile, Hillary Clinton has scheduled her second visits to Iowa and New Hampshire since announcing her candidacy for next week.

Jeb Bush Reverses Himself: ‘I Would Not Have Gone Into Iraq’ (TIME)
But says the war was “worth it” for the families of those who died

“I’m going to filibuster. I’m going to do everything it takes to block a short-term extension.” — Sen. Ron Wyden (D-Ore.) on efforts to extend the controversial PATRIOT Act, which is set to expire at the end of the month.

“Are you really going to ask such a stupid question?” — Speaker of the House John Boehner to a reporter asking about this week’s Amtrak derailment and criticism over transportation funding

Why presidential candidates must answer hypotheticals 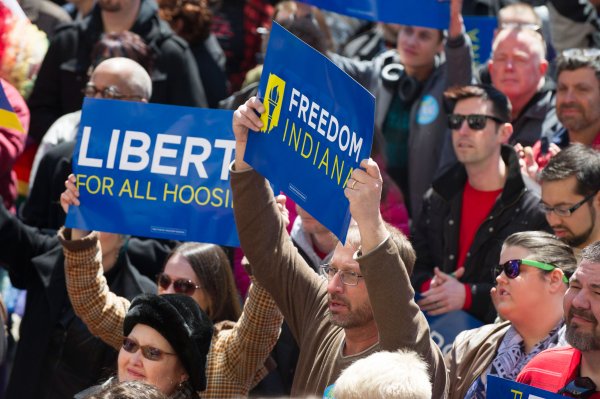 Religious Freedom Laws Get GOP Nod
Next Up: Editor's Pick