A police plane sprays herbicides over coca fields in El Tarra, in the Catatumbo river area of Colombia on June 4, 2008.
Luis Robayo—AP
By Naina Bajekal

Colombia’s government ordered a halt Thursday to the use of a herbicide that has formed a major part of U.S.-backed efforts to wipe out cocaine crops in the country, the Times reports.

The country’s Health Ministry had cited concerns after the World Health Organization reclassified the weed-killer glyphosate as a carcinogen (a cancer-causing substance) in March. The U.S. Environmental Protection Agency’s 2012 report disagreed, saying there was a lack of convincing evidence that the herbicide causes cancer in humans.

Over the past two decades over 4 million acres of land in Colombia have been sprayed with the herbicide, which kills coca plants (whose leaves are used to make cocaine).

The change in strategy may put a strain on Colombia’s relationship with the U.S. for the first time, as the two countries are usually close allies when it comes to a hard-line approach in the war on drugs. But earlier this month, a White House survey found that the amount of land in Colombia used to grow coca increased by 39% last year

Peru and Bolivia are the two other main cocaine-producing countries, but both avoid chemical herbicides, opting for a more labor-intensive manual eradication instead. This is riskier in Colombia, where the rebel guerrilla fighters have long protected coca crops. 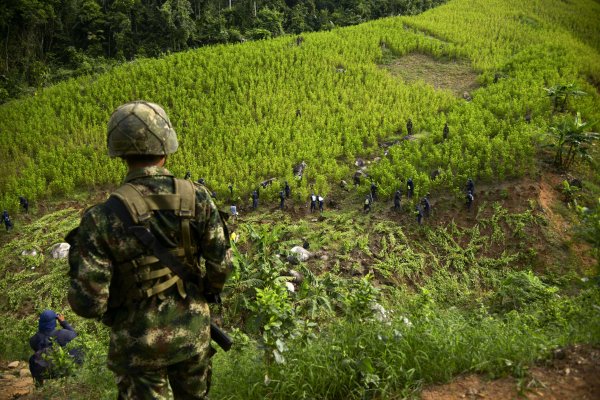