India's Prime Minister Narendra Modi speaks at a joint press conference with Chinese Premier Li Keqiang (not seen) in the Great Hall of the People in Beijing on May 15, 2015
GREG BAKER—AFP/Getty Images
By Rishi Iyengar / Hong Kong

On Sept. 28, 2014, Narendra Modi addressed a packed-to-the-rafters crowd at Madison Square Garden in New York City. The numbers were unprecedented. More than 18,000 people — either Americans of Indian origin or Indian expats living in the U.S. — converged on the iconic venue to listen to India’s new Prime Minister. They had been randomly chosen from over 30,000 who had applied to attend. A nearly identical public address less than two months later at Sydney’s Allphones Arena in Australia saw Modi draw another crowd of 16,000 members of the Indian community Down Under, followed by almost 10,000 Indian-Canadians in Toronto a month ago.

The crowd of 5,000 he is set to speak to in Shanghai this Saturday, one of the final stops on his three-day visit to China, pales in comparison to his previous megaspeeches abroad. But it will still be a landmark even for the Indian diaspora there.

“It’s a far cry from the figures you’d get just in the New Jersey area,” quips Amit Waikar, president of the Indian Association of Shanghai that will host the gathering. The Indian community in China is much smaller than that of countries like the U.S., with latest estimates by India’s Ministry of Overseas Indian Affairs placing its numbers at just over 48,000 (in addition to 44,000 in the Special Administrative Region of Hong Kong). But the number of confirmed attendees has already significantly surpassed any event Waikar’s association has ever held, and what is more remarkable, he says, is that people are traveling from a dozen different cities across China just to hear Modi speak.

“Smaller cities, where you normally don’t even expect too many Indians to be, have come forward,” he tells TIME, citing small manufacturing hubs like Yiwu, Keqiao and Ningbo, besides larger and better-known Chinese cities like Beijing, Shenzhen, Hong Kong and Macau.

As with a large section of the Indian population both within the country and abroad, the Indian community in China has great hopes and expectations from Modi.

“This is the first time we have got a Prime Minister who is not a politician but a leader,” says Notan Tolani, who will be traveling to Shanghai from Hong Kong in one of several delegations from the city. “He’s in touch with the ordinary people. He knows their pulse, he knows what the people of India want,” Tolani says.

Modi also represents increased optimism around India’s relationship with China, with his business-oriented policies and evident personal rapport with Chinese President Xi Jinping hopefully paving the way for greater cooperation between Asia’s two largest economies. The two leaders picked up this week where they left off during Xi’s visit to India last September, with the Chinese President welcoming Modi in his hometown Xian on Wednesday. (Modi had chosen to receive Xi in his home state of Gujarat, making the Chinese President the first high-profile foreign leader not to begin a bilateral visit in the Indian capital city of New Delhi.)

Modi’s visit to the Chinese capital Beijing on Friday, meanwhile, yielded 24 agreements worth $10 billion across several sectors, including railways, space cooperation, education and broadcasting. These too mirror the host of bilateral agreements signed during Xi’s trip to India, aimed at reducing the growing trade deficit between the two countries and promoting greater cultural exchanges.

“There are challenges,” says Vivek Arora, a Shanghai-based entrepreneur in the fashion industry who has been living in China for almost 20 years. “Indian and Chinese businesspeople need to learn more about each other to see what would be the best way to work together and add value to both societies,” he says. Arora is of the opinion that the two countries need to move beyond imports and exports or trading of commodities into more concrete investment opportunities, which he says will only happen through greater interaction and openness.

As for Saturday’s event, he says every other gathering of Indians organized in Shanghai “pales in comparison” to the anticipation and scale of this one.

“It’s the first time we have 5,000 Indians gathering in Shanghai,” he says. “Mr. Modi is a very good orator so his speeches are always quite uplifting. He’s trying to get India onto a path of progress, and that’s what everybody wants to hear.” 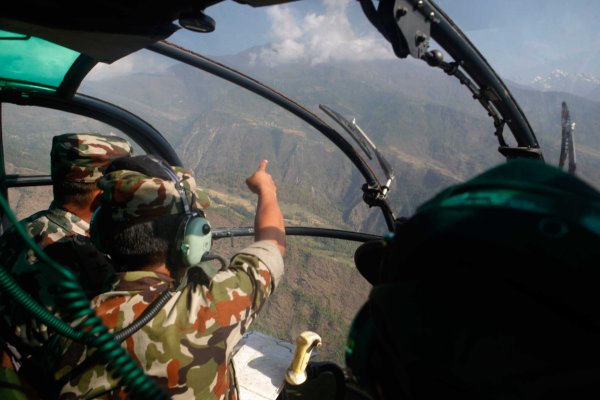 U.S. Chopper Found Crashed in Nepal
Next Up: Editor's Pick