Here's What You Could Do With a $9 Computer

By and large, you get what you pay for. That’s an adage that applies to everything from expertly crafted clothing to well cooked food. But when the price of goods drops dramatically, that doesn’t always mean you get less.

Case in point: C.H.I.P., a $9 computer that’s raising money on Kickstarter right now. With more than $1.1 million in funds raised with just over three weeks to go, the campaign to finance an ultra-low cost computer-on-a-chip has blasted past its $50,000 goal.

1. Finally write that novel: With a 1.0 gigahertz processor and 4GB of onboard storage, this micro-computer has all that it needs to run open-source software. For instance, LibreOffice, a free yet powerful suite of software, can get you banging out documents in no time. And with minimal distractions, you might finally write that novel you’ve been scheming up all these years. Of course, you can also finally tabulate that spreadsheet or craft that presentation, too, but that doesn’t sound anywhere near as fun.

2. Get your lolz all over the web: With the open source Chromium browser, C.H.I.P. users can browse all over the Internet, taking in everything from breaking news to trending memes. “Pretty much everything that you can do in Chrome that is not proprietary, you can do in Chromium,” says David Rauchwerk, the founder and CEO of Oakland, Calif.-based Next Thing, the company that’s putting out C.H.I.P.

Not all websites will work well on C.H.I.P. For instance, Flash is a codec owned by Adobe, so sites that use it (or display video using it) won’t work on Chromium — at least not without a plugin. But Chromium does support HTML5, which means a lot of the most current websites will load fine, and you can even view YouTube clips without a problem on this little-computer-that-could. That said, Rauchwerk cautions that with its lightly-powered processor, it’s not going to stream 4K video, but it will chug along nicely with clips at a lower resolution.

3. Finally beat King’s Quest: Powered by Linux, C.H.I.P can run all sorts of software, including DOSBox, an old-school video game emulator that can revive all your old favorites from Arkanoid to Zork. In addition, Linux has a ton of great, indie games that are worthy of your time. But this little computer also has more than enough might to run controller-based games, too. Connecting peripherals to C.H.I.P. either through its USB port or via Bluetooth ups its game considerably.

4. Scratch out some code: Because it’s compatible with thousands of apps, there’s a lot that users can do with C.H.I.P., but one function where this underpowered force can excel is in coding. Just connect a it to a keyboard and a monitor (using a VGA or HDMI snap-on shield, which cost a bit more) and fire up Scratch, one of dozens of programs that come preloaded on the computer.

“Scratch is an entire learning system, and there’s an entire curriculum that’s free and open source created by a lab at MIT,” says Rauchwerk. With downloadable lesson plans aimed at kids (but even adults can learn a thing or two), there’s a big library of APIs and architectures to learn.

5. Touch and go: There’s no use in having a computer this small if you can’t take it with you. One cool add-on that the Next Thing team pulled together is PocketC.H.I.P., a portable, combined 4.3-inch touchscreen display and keyboard that packs a 5-hour battery. Looking like a skinned Game Boy, PocketC.H.I.P. lets you game, code, or just compute anywhere, especially since the micro-computer has Wi-Fi connectivity. One Wilmington, Del.-based backer is going to use the PocketC.H.I.P. to teach coding to underprivileged kids, letting them keep and use the little computer between classes.

6. Turn your TV into a Smart TV: As digital has dominated the tech landscape, it’s created a lot of electronic waste. Next Thing’s engineers decided to give new life to old televisions by equipping C.H.I.P. with an output for component video, the old yellow cable that worked with your Super Nintendo.

“We have a lot of fun, retro gear in our studio,” says Rauchwerk. “It’s a way of giving life to this stuff that would be otherwise thrown away.” And that capability gives C.H.I.P. and an old TV endless potential. Turn it into a retro gaming station for your kids, a message terminal at your business, or an art installation showcasing your photographs.

This is just the beginning for C.H.I.P.; its users will be the best at defining what the machine can actually do. In the campaign’s most recent update, the company asked backers to share their plans for their C.H.I.P. computers when they start arriving in December. Overall, the most popular answer seemed to be that people wanted to use it as a tiny media center PC — one backer even plans on using it to convert an old jukebox into a Wi-Fi-connected music player. But ultimately, like any game-changing technology, it’s best use case likely hasn’t even been dreamed up yet. 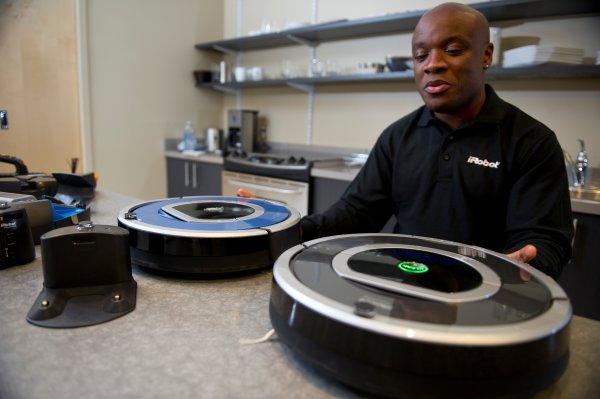 Here's Why a Lawnmower Roomba Wouldn't Kill Anybody
Next Up: Editor's Pick