Why the Gulf States No Longer Trust America

Arab Gulf leaders meeting with President Barack Obama at Camp David this week are expected to seek big security guarantees from the United States. Some states want new, advanced weaponry such as the F-35 fighter jet and Gulf diplomats in Washington said they wanted a formal defense treaty with the United States.

For its part, the Obama Administration has said the Camp David summit will focus on defense cooperation on ballistic missile defense, cyber warfare, and terrorism. Washington is also expected to argue that a negotiated nuclear deal with Iran won’t allow that country to secure atomic weapons.

But as the leaders sit down at Camp David, Gulf countries’ concerns over Iran are more than just nuclear weapons.

Saudi Arabia and its Gulf allies are likely to highlight what they see as a dangerous rise in Iranian influence throughout the Middle East. Since 2011, Tehran has backed both state- and non-state actors that Riyadh argues have destabilized the region: Syria’s President Bashar al-Assad, Lebanon’s Hizballah, Shiite militias in Iraq, and most recently Houthi rebels in Yemen.

Saudi Arabia, which is now leading a coalition of countries fighting the Houthis in Yemen, fears any U.S. rapprochement with Iran would only embolden Tehran’s proxies.

“The U.S. silence against the Iranians has encouraged Tehran to do more, because they think no one will stop them,” argues Mohammed al-Sulami, a fluent Farsi speaker and assistant professor of Iranian history and literature at Saudi Arabia’s Umm al-Qura University. “Now, with the nuclear negotiations, if they reach a final agreement, how would Iran react? With more money they can do more to help their proxies throughout the region.”

As long as the U.S is warming to Tehran, few promises or handshakes are likely to reassure leaders in Riyadh, Doha, or Abu Dhabi, who see Washington’s role in the Middle East in decline. These countries have been frustrated by the U.S.’s rapid pullout of Iraq, its reticence to intervene in Syria, and its general dismissal of an Iranian threat.

“It’s almost clear what Obama will tell them [the Gulf leaders]: that we are as committed to your security as we used to be, and now you should do your homework. In the end, Iran is your neighbor, so it’s up to you to create the balance with it,” says Awadh al-Badi, an advisor in the office of former Saudi intelligence chief Prince Turki al-Faisal.

“The issue is that reassurances aren’t convincing anymore. We already experienced what it means when the U.S. leaves its responsibilities — that’s what happened in Iraq, when American troops pulled out and left the country to thuggish political forces.”

Saudi Arabia’s concerns about rival Iran may not find a welcome audience in Washington. In Iraq, as well as in Syria, and Yemen, Iranian allied Shiite militias are in some cases fighting against a common enemy: terrorist groups including the Islamic State in Iraq and Syria (ISIS) and al-Qaeda.

Oman, the state that helped broker the initial discussions between Tehran and Washington, is also unlikely to agree with Riyadh’s view. Instead, Muscat has long argued that bringing Iran in from the cold will open up new diplomatic channels on the regions’ myriad crises.

But Saudi leaders are likely to make the argument to Obama that Iran will always do more harm than good: Even as they battle groups like ISIS, Iranian proxies drive recruits to the their arms. Shiite militias in Iraq, for example, have undertaken reprisal attacks against Sunni civilians, who see no choice but to turn to ISIS for protection.

Other Iranian allied forces in the region have been implicated in gross human rights abuses too. Syria’s Assad regime for example, with the help of fighters from Hizballah, has killed tens of thousands of civilians and sent jets to bomb civilian areas. Most recently, U.N. and American officials have indicated that Damascus is using chlorine gas against its enemies and the many civilians nearby.

“The U.S. has the wrong definition of terrorism in the Middle East. They include all the Sunni groups, but you have to equally look at the Quds force, the Iraqi Shia militias, Hizballah, and the Houthis,” says Sulami. “These groups are actually more dangerous because they are backed by a state — Iran.”

Whether it gets what it wants at Camp David or not, Saudi Arabia in particular may be more willing to veer away from its U.S. allies in the region, taking security into its own hands. While highly dependent on U.S. military equipment, the Saudi military is increasingly capable of fighting on its own. And increasingly willing to do so.

“Saudi Arabia under King Salman will not really wait for other countries to come and help,” says a Riyadh-based Saudi analyst and academic, who declined to be named. “We will act according to norms and prudence, but we have to look out for our interests, without waiting for approval.” 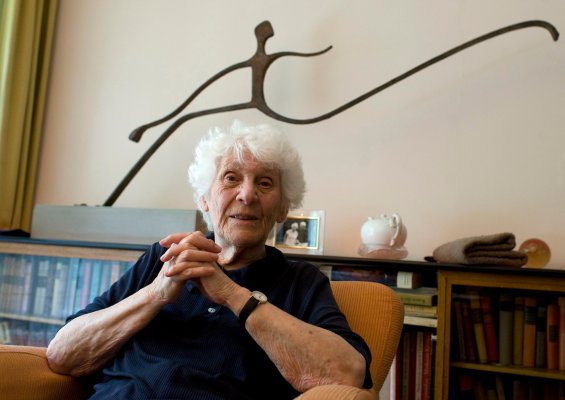 102-Year-Old Who Fled Nazis to Become Oldest Doctorate Recipient
Next Up: Editor's Pick