No State Left Unturned for Clinton

They came by the dozens to a union hall outside Philadelphia on May 13, bearing homemade T-shirts, vintage campaign buttons, even their own original poetry. “We stood aside/Eight years ago/And saw our dream/Replaced, you know,” read Diane Bowman, executive director of the Pennsylvania Democratic Party, reciting her personal elegy to Hillary Clinton’s 2008 campaign. “Now we are ready once again.”

Thus began one of many tent revivals that Clinton’s campaign brass is counting on to win her the White House. Ken Schulz, a lanky, bespectacled veteran of President Obama’s two campaigns, played the role of pastor, with a Sunday-school talent for channeling enthusiasm. “Clap once if you can hear me,” the Clinton staffer shouted above the din of 85 supporters, before asking them to gather in groups of five to share personal tales of why they support Clinton. He then asked for new organizing ideas. “Flash mobs,” said one supporter. That was followed by a “digital call to action.” The supporters took out their phones to tweet and share photos and selfies with the hashtag #Hillary2016.

The same scene has been playing out across the country, thanks to roughly 100 Clinton aides who are rewriting the normal launch script by deploying far beyond the early primary and caucus states of Iowa, New Hampshire, South Carolina and Nevada. Instead, Clinton will send her staff this spring to all 50 states, the District of Columbia and each overseas U.S. territory. “We want to be ready for any scenario, so having organizing take place outside the early four states allows you to do that,” says Marlon Marshall, deputy field director for the 2012 Obama run and now Clinton’s director of state campaigns and political engagement.

It is a massive, expensive and risky early investment of resources, but Clinton aides are betting it will pay even bigger strategic dividends. While the first votes in the Iowa caucuses are more than eight months away–the Pennsylvania primary is almost a year off–Clinton’s team wants to send the message that after being outorganized by Obama in 2008, she plans to marshal a movement in 2016.

Soon the campaign will hold hundreds of house parties across the country in a nationwide “day of action” pegged to Clinton’s first major campaign rally, in late May. Afterward, the paid organizers will retreat to the early states, leaving behind, at least in theory, a far-flung network of volunteers to continue organizing independently. Even in states such as Utah and Texas, where Clinton has almost no shot at winning electoral votes, supporters will be called on to make phone calls, encourage their friends to give money and travel to knock on doors.

The undertaking harks back to the 50-state strategy of former Democratic hopeful Howard Dean, who mentored several of Clinton’s top staffers. So far, no other candidate, Republican or Democrat, has the ability or will to match it.

That only adds to the excitement of true believers like Helene Ratner, 61, of Langhorne, Pa., the most active Clinton volunteer in the Keystone State, according to Schulz. She told TIME she has personally signed up 1,000 people for Ready for Hillary, the precampaign super PAC, and an additional 500 for the campaign since the announcement last month. Schulz’s remarks to a crowd of strangers, who had given up their Saturday for a candidate who may never face a serious primary challenge in her state, summed up the Clinton strategy in just a few words: “Every single thing that we do now is going to snowball,” he said. 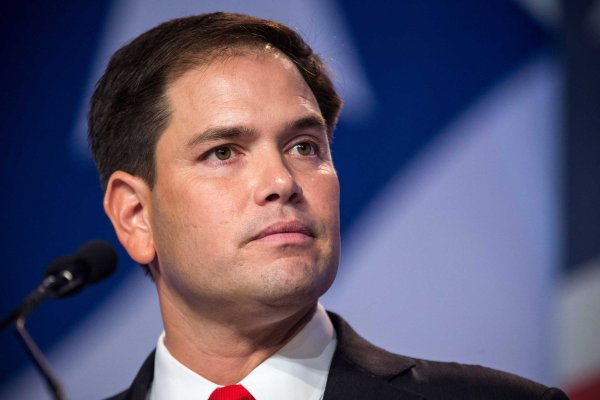