ISIS Is a Danger on U.S. Soil

In the aftermath of the attempted terrorist attack on May 4 in Garland, Texas–for which ISIS claimed responsibility–we find ourselves again considering the question of whether or not ISIS is a real threat. The answer is yes. A very serious one.

Extremists inspired by Osama bin Laden’s ideology consider themselves to be at war with the U.S.; they want to attack us. It is important to never forget that–no matter how long it has been since 9/11. ISIS is just the latest manifestation of bin Laden’s design. The group has grown faster than any terrorist group we can remember, and the threat it poses to us is as wide-ranging as any we have seen.

What ISIS has that al-Qaeda doesn’t is a Madison Avenue level of sophisticated messaging and social media. ISIS has a multilingual propaganda arm known as al-Hayat, which uses GoPros and cameras mounted on drones to make videos that appeal to its followers. And ISIS uses just about every tool in the platform box–from Twitter to YouTube to Instagram–to great effect, attracting fighters and funding. Digital media are one of the group’s most significant strengths; they have helped ISIS become an organization that poses four significant threats to the U.S.

First, it is a threat to the stability of the entire Middle East. ISIS is putting the territorial integrity of both Iraq and Syria at risk. And a further collapse of either or both of these states could easily spread throughout the region, bringing with it sectarian and religious strife, humanitarian crises and the violent redrawing of borders, all in a part of the world that remains critical to U.S. national interests. ISIS now controls more territory–in Iraq and Syria–than any other terrorist group anywhere in the world.

When al-Qaeda in Iraq joined the fight in Syria, the group changed its name to ISIS. ISIS added Syrians and foreign fighters to its ranks, built its supply of arms and money and gained significant battlefield experience fighting Bashar Assad’s regime. Together with the security vacuum in Iraq and Nouri al-Maliki’s alienation of the Sunnis, this culminated in ISIS’s successful blitzkrieg across western Iraq in the spring and summer of 2014, when it seized large amounts of territory.

ISIS is not the first extremist group to take and hold territory. Al-Shabab in Somalia did so a number of years ago and still holds territory there, al-Qaeda in the Islamic Maghreb did so in Mali in 2012, and al-Qaeda in Yemen did so there at roughly the same time. I fully expect extremist groups to attempt to take–and sometimes be successful in taking–territory in the years ahead. But no other group has taken so much territory so quickly as ISIS has.

Second, ISIS is attracting young men and women to travel to Syria and Iraq to join its cause. At this writing, at least 20,000 foreign nationals from roughly 90 countries have gone to Syria and Iraq to join the fight. Most have joined ISIS. This flow of foreigners has outstripped the flow of such fighters into Iraq during the war there a decade ago. And there are more foreign fighters in Syria and Iraq today than there were in Afghanistan in the 1980s working to drive the Soviet Union out of that country. These foreign nationals are getting experience on the battlefield, and they are becoming increasingly radicalized to ISIS’s cause.

There is a particular subset of these fighters to worry about. Somewhere between 3,500 and 5,000 jihadist wannabes have traveled to Syria and Iraq from Western Europe, Canada, Australia and the U.S. They all have easy access to the U.S. homeland, which presents two major concerns: that these fighters will leave the Middle East and either conduct an attack on their own or conduct an attack at the direction of the ISIS leadership. The former has already happened in Europe. It has not happened yet in the U.S.–but it will. In spring 2014, Mehdi Nemmouche, a young Frenchman who went to fight in Syria, returned to Europe and shot three people at the Jewish Museum of Belgium in Brussels.

The third threat is that ISIS is building a following among other extremist groups around the world. The allied exaltation is happening at a faster pace than al-Qaeda ever enjoyed. It has occurred in Algeria, Libya, Egypt and Afghanistan. More will follow. These groups, which are already dangerous, will become even more so. They will increasingly target ISIS’s enemies (including us), and they will increasingly take on ISIS’s brutality. We saw the targeting play out in early 2015 when an ISIS-associated group in Libya killed an American in an attack on a hotel in Tripoli frequented by diplomats and international businesspeople. And we saw the extreme violence play out just a few weeks after that when another ISIS-affiliated group in Libya beheaded 21 Egyptian Coptic Christians.

And fourth, perhaps most insidiously, ISIS’s message is radicalizing young men and women around the globe who have never traveled to Syria or Iraq but who want to commit an attack to demonstrate their solidarity with ISIS. These are the so-called lone wolves. Even before May 4, such an ISIS-inspired attack had already occurred in the U.S.: an individual with sympathies for ISIS attacked two New York City police officers with a hatchet. Al-Qaeda has inspired such U.S. attacks–the Fort Hood shootings in late 2009 that killed 13 and the Boston Marathon bombing in spring 2013 that killed five and injured nearly 300. The attempted attack in Texas is just the latest of these.

We can expect more of these kinds of attacks in the U. S. Attacks by ISIS-inspired individuals are occurring at a rapid pace around the world–roughly 10 since ISIS took control of so much territory. Two such attacks have occurred in Canada, including the October 2014 attack on the Parliament building. And another occurred in Sydney, in December 2014. Many planning such attacks–in Australia, Western Europe and the U.S.–have been arrested before they could carry out their terrorist plans.

Today an ISIS-directed attack in the U. S. would be relatively unsophisticated (small-scale), but over time ISIS’s capabilities will grow. This is what a long-term safe haven in Iraq and Syria would give ISIS, and it is exactly what the group is planning to do. They have announced their intentions–just like bin Laden did in the years prior to 9/11.

Michael Morell is the former deputy director of the CIA and has twice served as acting director. He is the author of The Great War of Our Time: The CIA’s Fight Against Terrorism — From al Qa’ida to ISIS. 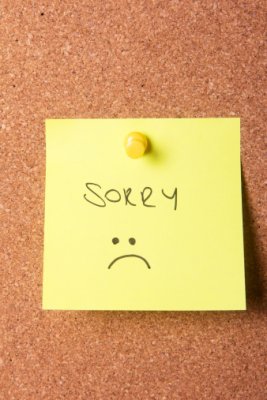 4 Secrets to a Good Apology, According to Research
Next Up: Editor's Pick