An Afghan policeman stands guard at the site of an attack in Kabul, Afghanistan May 13, 2015.
Mohammad Ismail—Reuters
By Rishi Iyengar

Fourteen people, including 9 foreigners, were killed in an attack in Afghanistan’s capital city Kabul on Wednesday night after at least one gunman opened fire on a guesthouse, a government official said.

Fifty-four other hostages were rescued in the attack that only ended in the early hours of Thursday morning, the Associated Press reported. The assault began at 8:30 p.m. Wednesday, when a gunman or gunmen opened fire at the restaurant of the Park Palace Hotel, according to Kabul’s chief of police General Abdul Rahman Rahimi.

U.S. embassy spokesperson Monica Cummings told the AP in an email that a still unidentified U.S. citizen had been killed.

At least two of the other victims were Indian, and three other Indians were rescued and were being sheltered at the Indian embassy, a diplomat told Reuters.

The Taliban claimed responsibility on Thursday, with the militant group’s spokesperson Zabihullah Mujahid claiming in an email to media that they had targeted the hotel because of the presence of Americans and other foreigners there.

A majority of the guests were at the hotel, located in the same neighborhood as a U.N. compound and the Indian embassy, for a party honoring a Canadian citizen, American attendee Amin Habib told the AP.

A Canadian spokesperson said all its embassy staff were “safe and accounted for.”

Mujahid said in the email that there was only one attacker wearing a suicide vest and armed with a Kalashnikov rifle and a pistol, contrary to the three attackers cited by the Afghan security authorities.

The attack bears similarities to two others carried out by the Taliban in Kabul in 2014, at a hotel and a Lebanese restaurant respectively, and is one of the most blatant assaults since the extremist group announced its spring offensive this year. 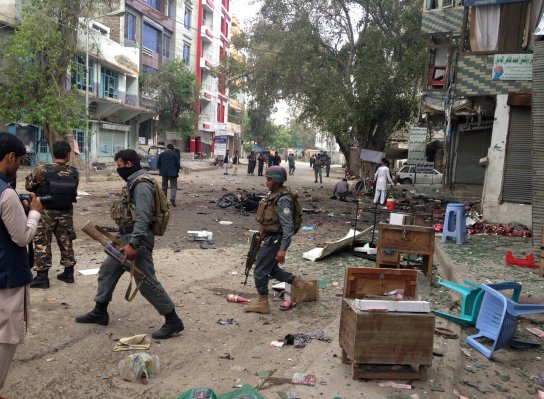