Photograph by Danny Kim for TIME; Gif by Mia Tramz for TIME
By Katy Steinmetz

Organic products are all over grocery store shelves and menus, but consumers don’t have much faith in the “o” word, according to a study from market research firm Mintel. More than half of shoppers say they believe that labeling something as organic is “an excuse to charge more,” and more than one-third say they believe “organic” is just marketing jargon “with no real value or definition.”

The word has, however, had a strict definition overseen by the federal government since 2002. Back then, fresh off the heels of public debate about the term, a report on Oregon shoppers found that just 7% had no trust in the label. “It’s about an erosion of confidence,” says Billy Roberts, an analyst with Mintel, which surveyed 2,002 U.S. adults for the new study. “It’s a question of whether the whole supply chain is delivering on an organic promise.”

Roberts says that highly visible food recalls, along with a perennial distrust of big corporations and the government, has led people to feel less certain about what they’re getting when they buy something at the local grocery store. The entrance of bigger players into the organic scene—companies such as Wal-Mart, Target and PepsiCo have all been expanding their selections in recent years—has also driven down prices, Roberts notes, “and those high prices were almost a certain reassurance to consumers that what they were buying was what had been promised to them.”

The U.S. Department of Agriculture decides whether any company or farm can slap an “organic” label on their product and investigate every complaint that the word is being falsely used. “We have a robust system,” says Betsy Rakola, the USDA’s organic policy advisor. “There’s a lot of integrity behind the label. Anyone who wants to sell or market or label their product as organic has to follow the USDA regulations.”

Those regulations include rules that farmland must have been free of genetically modified organisms (GMOs) for at least three years, for example. Organic livestock has to eat 100% organic feed and have access to the outdoors. Facilities pursuing the label must be inspected and reviewed every year. Though Mintel found that many consumers believe organic products are healthier for them, Rakola says their oversight is about the production process. Farmers have to promote ecological balance and biodiversity; they have to enhance soil and water quality; they must conserve resources. “It’s about the process and how the food is grown,” she says. “That’s the assurance that the seal provides.”

Organic may also have lost credibility because of its close association with buzzwords that have little or no definition in the eyes of the government. Outside of meat and dairy products, the word “natural” has no concrete meaning in the marketplace—which has upset some consumers enough to sue companies like Tyson for claiming they sell “100 percent all-natural” chicken nuggets. So far as Rakola is aware, there is no standard at all for when people can use the word “artisanal,” even though it evokes an image of small-batch, hand-crafted, superior-quality products.

Clamor for uniformity—for the sake of consumers and for leveling the competitive playing field—led to “organic” getting its federal definition 13 years ago. Health concerns helped win “gluten-free” a standard that went into effect in 2014; while the presences of little gluten makes little difference for trendier dieters, the lack of assurance that new dishes or products were in fact gluten-free became a danger for those with actual allergies to gluten in recent years.

Should words like “natural” and “artisanal” have definitions too, so they can’t be bandied about? “It’s not for us to jump in and say what people need,” Rakola says, emphasizing that the USDA’s job is to respond to the public and to Congress.

The market research analyst sees a chance for businesses to get ahead in the meantime, using transparency and interactive elements to show shoppers more about how their products are made. That may also be a path to giving thousands of organic products more credence with the public. “Consumers are a little hesitant to purchase many of them because of lack of confidence,” Roberts says. “It’s an opportunity for manufacturers to reach consumers, establishing that trust that consumers are really looking for.” 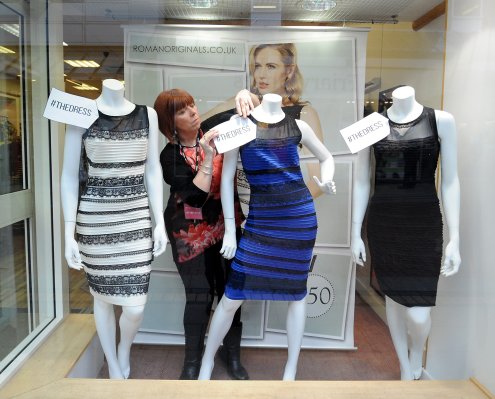 New Study Explains Why People Saw 'The Dress' Differently
Next Up: Editor's Pick