Not so fast: Brightman at a March press event announcing her now-postponed mission
Dave J Hogan; Getty Images
Ideas
By Jeffrey Kluger
Jeffrey Kluger is Editor at Large for TIME magazine and the author of ten books, including Apollo 13, Apollo 8 and two novels for young adults. He has written more than 40 cover stories for TIME on topics ranging from space to human behavior to climate to medicine. Along with others at TIME, Kluger is an Emmy nominee for the web series A Year in Space.

Here’s betting you’d like to fly in space—almost everybody does. Here’s betting you’ll never actually do it—almost no one does. Those two facts are more than casually connected. The news today that Sarah Brightman—the internationally celebrated soprano who paid $52 million to spend 10 days aboard the International Space Station (ISS)—has backed out of the mission helps illustrate why.

Space flight has never been a safe or easy or, most of the time, even terribly fun thing to do. The training is brutal, the rockets are dangerous, the spacecraft are cramped, the living conditions are spartan, and as for the one thing you think you’d enjoy the most—the weightlessness? Odds are you’d spend a fair bit of your time aloft doing little but throwing up—which you could jolly well do back home.

Astronauts and cosmonauts know this, and so do the people who train them to fly. There’s a reason the Americans and Soviets chose test pilots in the early days of their space programs. There’s a reason too that, during the shuttle era, even astronauts who were going to fly as mission specialists—meaning they would not be piloting the spacecraft—did themselves a favor if they were licensed pilots too. If you’ve got the ice-water blood necessary to take a plane aloft and not lose your marbles when an engine quits, or the weather turns surly, or the ground’s rushing up at you fast and you’ve got exactly three seconds to get things under control before you come to a very messy end, you’re likelier to have the cool to handle yourself when a stack of engines generating 7.3 million lbs. (3.4 million kg) of thrust ignite underneath your back and hurl you to space at an eventual speed of 17,500 mph (28,200 k/h).

The late Jack Swigert, command module pilot for Apollo 13—a man who clearly knew what it felt like when everything falls to pieces around you—once reflected on why lunar astronauts never spoke terribly lyrically about their journeys, often describing what they saw with off-the-shelf adjectives like “awe-inspiring” or “incredible.” The explanation, he said, is that you can either go to the moon, or you can appreciate the going, but not both. The very thing that qualifies you to make the trip—a coolness, a detachment in the face of the deadly and improbable place you find yourself—disqualifies you to describe it in terribly resonant terms. So fighter jocks fly and poets stay home and they both do what they do best.

But that has all changed in the last decade—or at least there has been an attempt to change it. We live in the era of space tourism, of the citizen astronaut, of the multi-millionaire buying a seat on a Russian Soyuz rocket for mid-eight figures, or plunking down a quarter of a million dollars for a quarter of an hour popgun flight on Richard Branson’s SpaceShipTwo. We chatter about the one-way trip to Mars and the inflatable hotel in Earth orbit and Jeff Bezos doing who knows what with his secretive Blue Origins aerospace company, which promises that it’s “opening the promise of space to all,” though to date it’s gotten nowhere close.

Brightman, in parlaying great wealth and existing fame to a chance to fly to the ISS, was attempting one of the most hair-raising space feats of all. With the shuttle grounded, the only way to get to the space station is Russia’s Soyuz spacecraft, a three-person pod so tiny that passengers fly in a semi-fetal position, lying on their backs with their knees drawn up to their chests. At best they stay that way for six hours after liftoff, assuming they launch at the right moment to chase down the station in just four orbits. But, launch at a different moment and it can take as long as two days to execute the same rendezvous.

On both the way up and the way down, the crew can pull more than 4 g’s, and that’s only if everything goes well. In 2008, cosmonaut Yuri Malenchenko and astronaut Peggy Whitson were coming home aboard a Soyuz when the rear part of the spacecraft—the service module—failed to separate as it was supposed to. That sent them on what’s called a ballistic reentry of 30 degrees, causing them to pull a tortuous 8 g’s. The near-fatal plunge took 23 minutes to unfold. Even the best Soyuz reentry has been described by astronaut Scott Kelly, who is aboard the ISS for a marathon one-year stay and had been looking forward to Brightman’s visit, “like going over Niagara Falls in a barrel—that’s on fire.”

Brightman didn’t even begin her training until Jan. 19, according to sources at Roscosmos, the Russian space agency, which would have given her less than eight months to get ready for her early September launch—a fraction of the years of preparation a professional astronaut may put in before flying. And she had skipped out on the training altogether after April 22, according to the same sources. A request for comment from Brightman’s team has not been returned.

Space Adventures, the Virginia-based space tourism company that serves as travel agent for trips to the ISS, did put out a statement announcing that Brightman was “postponing her plans to launch” due to “personal family reasons.” But the odds are good that that postponement will become—or already is—a cancellation. There may well be family problems responsible for the scrub. Or maybe Brightman just got a clear-eyed look at what she was doing and gave a thought to the lost crew of Challenger in 1986, the lost crew of Columbia in 2003, the lost crew of Soyuz 11 (three cosmonauts who died during reentry in 1971 when their spacecraft sprang a pressure leak), the lost crew of Apollo 1 (three astronauts who died in a launch pad fire in 1967) and reckoned that maybe, just maybe, space isn’t for dilettantes.

There’s no shame in not being fit to fly in space; that describes the overwhelming majority of us. And there’s no harm in working toward the day when space really is something for everybody, when tourists can go and settlers can go and adventurers can go—all traveling with the right machines and the right training and the right sense of humility and respect. “Space tourism,” for now, is a deadly oxymoron. If Brightman chose not to go because she recognized that, she showed a particular kind of candor and courage that deserves its own applause. 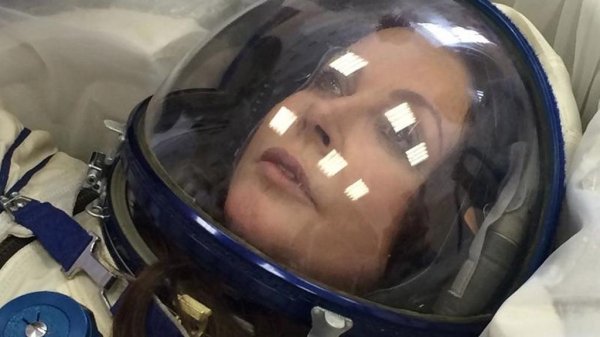 Singer Sarah Brightman Is Not Going to Space
Next Up: Editor's Pick