Jeb Bush still doesn’t know how to talk about Iraq.

The all-but-certain Republican presidential candidate’s strategy for handling his trickiest political inheritance has swung wildly in recent days, earning criticism from both sides of the aisle.

On Saturday the former Florida governor appeared to say he would have supported the 2003 invasion of Iraq even if he knew weapons of mass destruction weren’t present. By Tuesday, Bush was backpedaling, claiming he “misheard” the question. And by Wednesday he was punting, arguing against answering “hypothetical” questions about a war that claimed 4,491 U.S. lives.

No candidate this year is haunted by that conflict like Bush, who must weigh political and familial considerations. But he’s not alone in his struggles. In a campaign dominated so far by foreign policy themes, GOP presidential hopefuls are increasingly torn between the need to project toughness and the need to acknowledge what many voters see as the defining error of the last Republican commander-in-chief.

It’s a balancing act driven by the demands of the electorate. Years of surveys show the American public’s rejection of a war launched on faulty intelligence: a 2014 NBC News/Wall Street Journal poll, for example, found 71% of voters thought the war “wasn’t worth it,” compared to just 22% who thought it was. At the same time, the tumult rippling across the Middle East—from the rise of the Islamic State (ISIS) to the unrest in war-torn nations like Libya, Syria and Yemen—has rejuvenated the nation’s hawkish impulses. A succession of polls this year suggest most Americans support sending ground troops to fight ISIS.

As a result, GOP candidates have embraced anew a muscular foreign policy that had atrophied for much of the Obama presidency. Promises to calm the chaos of the Middle East have dominated early candidate cattle calls, while tough talk on Iran has taken the place of Obamacare as a stump speech fixture. Even Sen. Rand Paul, who advocates a restrained foreign policy as part of the party’s more isolationist wing, introduced an amendment to significantly boost the defense budget. After announcing his presidential bid in April, the Kentuckian posed in front of a retired aircraft carrier in the port of Charleston to repeat his call. On a recent trip to South Carolina, Sen. Marco Rubio invoked Liam Neeson’s avenging promise from the movie Taken: “We will look for you, we will find you, and we will kill you.”

The bellicosity is one element of a broader strategy that includes also blaming President Obama for the mess in the Middle East and tethering Bush to his older brother. “If we knew then what we know now and I were the president of the United States, I wouldn’t have gone to war,” New Jersey Gov. Chris Christie told CNN. Paul told the Associated Press that Bush’s comments represent “a real problem if he can’t articulate what he would have done differently.”

“Knowing what we know now, of course we wouldn’t go into Iraq,” Sen. Ted Cruz told The Hill.

Turning Iraq into a centerpiece of the campaign is fraught with risk for Republicans, who have wrestled with the demons of a misbegotten war for a decade now. In 2004, the GOP made support for the conflict into a proxy for patriotism and rode the decision to victory in the presidential election. But by 2006, Democrats regained control of Congress amid the persistent casualties and growing sectarian violence sweeping Iraq.

Two years later, Obama’s early opposition to the war helped vault him past Hillary Clinton in their epic primary contest. He then used Sen. John McCain’s outspokenness for the war against him, mocking McCain’s suggestion that there might be an American presence in Iraq for 100 years. In 2012 Obama won re-election while highlighting his commitment to end the war.

But as the stability of Iraq crumbled in the wake of Obama’s troop withdrawal, Republicans sensed they could regain the upper hand. GOP candidates have criticized Obama for not leaving a larger security force in place to support the Iraqi government. Party strategists believe the path to the presidency hinges in part on an ability to disavow George W. Bush’s mistakes while blaming Obama for making the mess much worse.

Recognizing it won’t be easy, some of the party’s presidential contenders are treading lightly. In a speech laying out his foreign policy vision Wednesday, Rubio only briefly alluded to Iraq, implying that Obama’s troop drawdown was too swift and invoking “Afghans worried that America will leave them like we left Iraq.”

The delicate balancing act is sharply different from the strategy employed by the likely Democratic nominee. After years of standing by her vote to authorize the war, Clinton wrote in her 2014 memoir that she “got it wrong. Plain and simple.”

It was a reflection of how the politics of the issue had shifted—and may be shifting still. 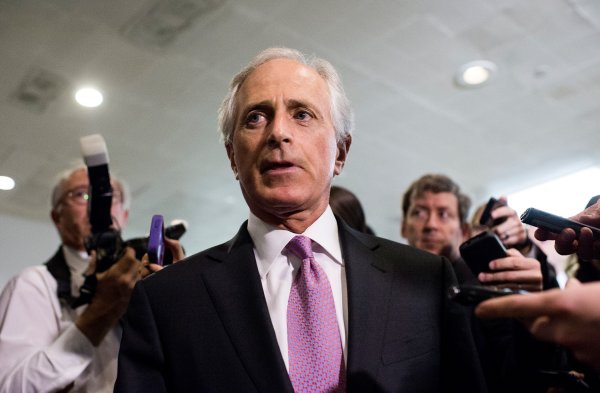