Lauren Bacall and Humphrey Bogart cut the cake at their wedding on May 21, 1945
Hulton Archive / Getty Images
By Lily Rothman

Married, read the heading before the brief write-up in TIME: “Humphrey Bogart, 45, cinema’s surly, frog-voiced bad man; and Cinemactress Lauren Bacall, 20; he for the fourth time, she for the first; in Mansfield, Ohio.”

The wedding, which took place 70 years ago, on May 21, 1945, made official one of the 20th century’s best-loved on- and off-screen romances—despite a four-and-a-half-decade age gap.

But, while news outlets didn’t obsess about the age difference in the way they probably would today—TIME didn’t editorialize at all about their ages, unless you count a 1969 essay titled “In Praise of May-December Marriages”—it didn’t pass unnoticed. According to A. M. Sperber and Eric Lax’s biography Bogart, Bogart’s wife at the time he began his affair with Bacall, the actress Mayo Methot, referred to Bacall as “your daughter” when talking with her estranged husband.

Bogart was also consumed by the age difference. As Bacall recounted in her autobiography By Myself, it was “never out of [Bogart’s] thoughts” while they courted. Bacall, however, paid it no worry, telling Vanity Fair “that 25-year difference was the most fantastic thing for me to have in my life.”

Indeed, the couple was together until Bogart’s death in 1957. 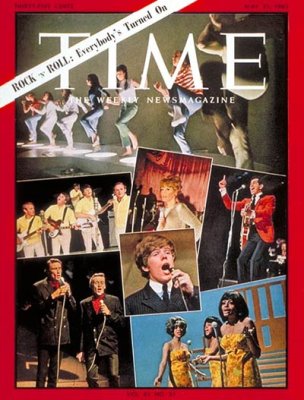 Debunking One of Rock Music's Original Myths
Next Up: Editor's Pick