Life in Space? The Odds Just Went Up

A different kind of Europeans: The discolored cracks of the Jovian moon Europa could suggest life
NASA/JPL
By Jeffrey Kluger

If ever there was a time to disobey HAL, the coolly sociopathic computer that stole the show in both 2001: A Space Odyssey and the 2010 sequel, it’s now. At the end of that second movie, the universe unfolds before a group of astronauts exploring the Jupiter system, and as they marvel at it, HAL gives them a simple warning: All these worlds are yours—except Europa. Attempt no landing there.

That’s a rule that’s getting harder not to break. Europa is one of the four large moons of Jupiter, and easily its most compelling. Its entire surface is covered in a thick rind of water ice, with what is almost certainly a deep, globe-girdling ocean of liquid water underneath. Now, a study published in Geophysical Research Letters offers new evidence that the ocean could be home to—or at least hospitable to—extraterrestrial life.

It’s not easy to keep water in a liquid state out in the cosmic provinces where Europa lives. The little world’s surface temperature averages -280º F (-173º C), with the sun little more than a very bright match head 483 million mi. (779 million km) away. But you don’t need sunlight to generate warmth when you’ve got what’s known as tidal flexing.

As Europa circles Jupiter, its large sister moons, Io, Ganymede and Callisto, do the same in their own orbital lanes. The moons periodically pass one another like cars on a race track, and as they do, they tug—and slightly stretch—one another gravitationally. All that flexing generates internal heat, and in Europa’s case, that keeps its ocean liquid and relatively warm.

Multiple space probes and Earthly telescopes have photographed a webwork of cracks all over Europa’s surface, the result of fracturing and refracturing caused by the constant pulsing. When the cracks appear, subsurface water percolates—or even bursts—to the surface. A lot of those cracks turn a dark yellow-brown over time, and that raises intriguing possibilities.

The discoloration is likely caused by the particular chemistry of the water as it is exposed to the harsh radiation of space. But just what that chemistry is was unknown. It could be sulfur, it could be magnesium or it could, tantalizingly, be salt, giving the Europan oceans the same warm, amniotic conditions as Earth’s own.

To test this idea, planetary scientist Kevin Hand and co-author Robert Carlson, both of NASA’s Jet Propulsion Laboratory in Pasadena, Calif., built what they called “Europa in a can.” Starting with both straight sodium chloride—or table salt—and a combination of water and salt, they chilled both test samples down to the same temperature as Europa’s surface and bombarded them with radiation similar to the environment of Jovian space. The radiation bath continued for varying lengths of time—all on the order of tens of hours. Direct radiation for that long, Hand and Carlson calculated, was the equivalent of about a century’s worth of the more diffuse radiation of space.

Over time, the samples did what the researchers suspected they’d do, which was turn precisely the yellow-brown color of the Europan fractures—with longer radiation exposure producing darker shades. But since human eyeballs are not the most precise ways to measure such things, the researchers also compared the electromagnetic spectra of their lab samples to the spectra of the Europa cracks, taken from images captured by NASA’s Galileo Jupiter probe. The two lined up perfectly.

“This work tells us the chemical signature of radiaton-baked sodium chloride is a compelling match to spacecraft data for Europa’s mystery material,” said Hand in a statement that accompanied the release of the study.

None of this means Europa is home to life, but it goes a long way to making the case that its environment is right for it—a critical first step. Before too long, the mystery may be probed from close up. Last year, the White House included a request for $30 million to study a mission to Europa, as part of NASA’s fiscal 2016 budget.

The plan would involve sending an unmanned probe to orbit Jupiter and make perhaps 45 flybys of Europa, during which it would remotely study the moon’s anatomy and chemistry, and perhaps fly through some of the plumes of water vapor that erupt from its fractures, analyzing their composition. Last February, JPL held a workshop to conduct preliminary planning for the mission and polled planetary scientists around the world to ask what instruments they think should be included on the spacecraft.

The Jupiter trip, if it’s green-lit at all, won’t happen soon. The earliest a Europa probe would probably launch would be 2022, arriving at the Jovian system sometime around 2030. But Europa has time. It’s been there, like Earth, for more than four billion years. If, like Earth too, the moon has incubated life over those long epochs, it’ll still be waiting for us when we arrive. 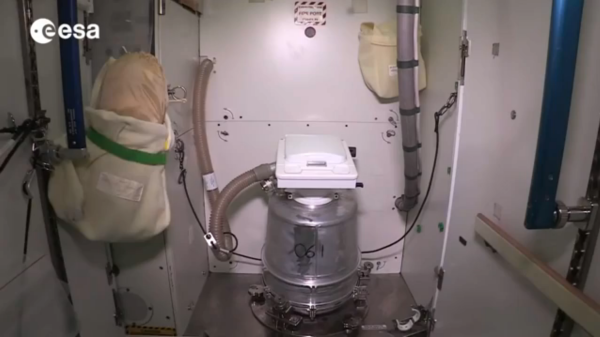 Watch This Astronaut Explain Space Toilets
Next Up: Editor's Pick