Security officials cordon off the area at the scene of an attack on a bus in Karachi, Pakistan, on May 13, 2015
Akhtar Soomro—Reuters
By Rishi Iyengar

Gunmen attacked a bus carrying members of a religious minority in the southern Pakistani city of Karachi on Wednesday, killing 43 and injuring about a dozen.

Provincial police chief Ghulam Haider Jamali said the bus was headed to a place of worship for Ismaili Shi‘ite Muslims when the attackers boarded it and began firing, the Associated Press reported.

About 60 people were reportedly on board the bus when the six gunmen climbed aboard. The assailants reportedly used 9-mm pistols to execute their victims.

The Pakistani Taliban and other Sunni Muslim groups that have a presence in cities like Karachi have long targeted Shi‘ites, believing that they are apostates, although no one has yet claimed responsibility for Wednesday’s attack.

“That’s the probability, that some section of the Taliban or some other extremist sectarian organization carried out this attack,” Hasan Askari Rizvi, a Pakistani political scientist and analyst, tells TIME.

Rizvi added that the attack is most likely a message to the government and the Pakistan army, which has recently stepped up its crackdown on extremist groups. “It’s a pre-emptive strike, it looks like an action to deter the army and Rangers [a border security force] from taking any firm actions against these militant groups,” Rizvi says. “But they will not be deterred by this kind of action, I expect some major action in two or three days time by the military and paramilitary forces.” 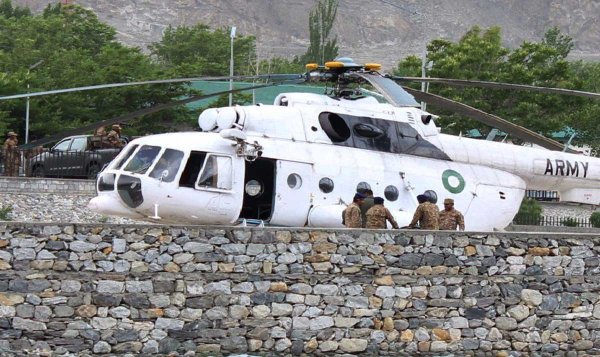 Diplomats Killed in Pakistan Helicopter Crash
Next Up: Editor's Pick