When Sen. Marco Rubio sat down for a Q&A session at a Council on Foreign Relations event, one participant noted that his differences on foreign policy with President Obama were “very modest” and asked where he disagreed. The Florida Republican chuckled in response.

On Wednesday, when Rubio returns to the Council on Foreign Relations three years later, that question won’t be asked again.

Now a candidate for the Republican presidential nomination, Rubio has traded in a moderate pitch on international affairs for an aggressive, hawkish approach. In his first policy speech as a declared White House hopeful, he will be pushing a muscular stance for the United States and trying to calm the worries of those who think he is too squeamish to use America’s might.

For Rubio, its both a natural evolution on his thinking in an era of Islamic State fighters and new threats from Russia, as well as a shift rightward to match his party’s demands of its next presidential nominee. Republican voters and caucus participants in early nominating states demand an orthodoxy from their presidential candidates, and Rubio’s earlier flirtation with moderation—even if not entirely moderate—would prove disqualifying inside the party.

For instance, the now hawkish Rubio previously backed negotiations with Iran over its nuclear program in 2012. Now, as an increasingly vocal member of the Senate Foreign Relations Committee, he unsuccessfully sought to derail Obama’s still-gelling agreement with Tehran over its nukes. He unsuccessfully tried to attach one amendment that would have made it impossible for the United States to reach a final agreement with Iran; leaders in his own party kept the measure far away from the final bill that gives Congress oversight of any deal.

And in 2012, Rubio intimated that the United States has limited capacity to guide the world. “Let’s stop and remember that the world America made is better, but it is not perfect,” Rubio said. “But it is vastly more peaceful and prosperous than any other age in recorded history.”

Rubio’s rivals are hoping the charismatic, 43-year-old son of Cuban immigrants has already sullied his conservative credentials with such statements, along with acknowledging a role for the United Nations in foreign policy. As the crowded field of White House hopefuls lurch rightward over each other, Rubio’s earlier, moderate-sounding views are unlikely to win him many friends.

“Until recently, the general perception was that American conservatism believed in robust and muscular foreign policy,” Rubio said during a 2012 appearance at the centrist Brookings Institution. “That was certainly the hallmark of the foreign policies of both President Bushes and of President Reagan. But when I arrived in the Senate last year, I found that some of the traditional sides in the foreign policy debate had shifted.”

It proved to be a temporary shift, fueled in part by the libertarian-leaning Tea Party movement that gave the GOP great wins in 2010’s midterm elections.

Now, Rubio is facing a Republican electorate that is itching for a tougher stance against Vladimir Putin’s Russia, stronger sanctions against Iran and improved relations with Israel. Rubio’s advisers are looking at Wednesday’s speech to assure voters that he can deliver on that wish list.

Rubio offered a preview of it last weekend when he went before conservatives in South Carolina. Channeling Liam Neeson’s character in the film “Taken,” the senator promised an audience in Greenville he would have a tough message for America’s enemies: “We will look for you, we will find you and we will kill you.”

It’s quite the change from a figure who earlier in his career called for restraint in military engagements; he now backs unlimited authority for Obama to chase Islamic State fighters across the globe.

Rubio also shifted positions on military spending. In 2013, he said any increases to the military budget had to be accompanied by cuts to other spending. With the campaign approaching, Rubio in March called for more military spending without corresponding reductions elsewhere.

Rubio and his advisers are banking his foreign policy experience and interest will set him apart from a field that is likely to include Gov. Chris Christie of New Jersey and Scott Walker of Wisconsin, as well as former Govs. Jeb Bush of Florida, Rick Perry of Texas and Mike Huckabee of Arkansas. Rubio tells crowds that senators are more qualified than governors when it comes to foreign policy.

“The next president of the United States needs to be someone that has a clear view of what’s happening in the world, a clear strategic vision of America’s role in it and a clear practical plan for how to engage America in global affairs,” Rubio told reporters in January. “And I think, for governors, that’s going to be a challenge, at least initially, because they don’t deal with foreign policy on a daily basis.” 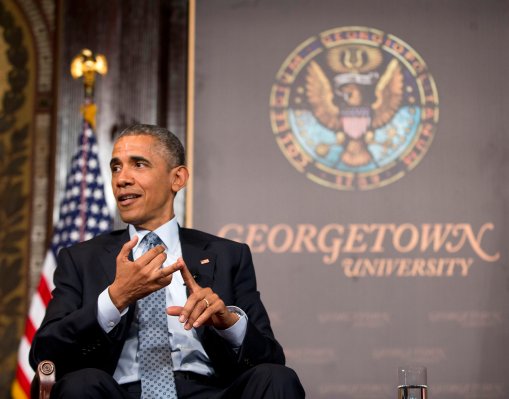 Obama Pressed on How He Talks to Black Community
Next Up: Editor's Pick