This combination made with file photos provided by the Madison, Wis. police department and Wisconsin Department of Corrections shows Madison Police officer Matt Kenny, left, and Tony Robinson, a biracial man who was killed by the officer.
AP
By Victor Luckerson

In a lengthy and detailed explanation of his investigation into the shooting of 19-year-old Tony Robinson, District Attorney Ismael Ozanne told reporters he had determined that the use of deadly force by officer Matt Kenny, who is white, was lawful.

Following Tuesday afternoon’s announcement, Robinson’s mother, Andrea Irwin, told CNN her family “absolutely” plans to file a civil lawsuit against the police. “The things that have taken place since my son passed and the things that have been done to my family, to me, they’ve gone above and beyond to try to make sure they kick me when I’m down,” she said. “They have done a smear campaign against my child and against me since this all began.”

Kenny was responding to reports of a disturbance in Madison on March 6 that involved a man dodging through traffic and punching multiple people, Ozanne said. A friend of Robinson’s initially called 9-1-1 just before 6:30 p.m., concerned about Robinson’s erratic behavior. The friend said Robinson was “tweaking” after he took hallucinogenic mushrooms, the Wisconsin State Journal reports. Other emergency callers said a man fitting Robinson’s description had punched multiple pedestrians in the area.

When Kenny arrived on the scene minutes later, Robinson was in his friend’s apartment. According to Kenny’s account, Ozanne said, Robinson immediately punched Kenny in the face. Kenny then fatally shot Robinson seven times within three seconds, with all of the bullets striking the teen.

Robinson’s death sparked days of large protests within Madison. It was another death in a string of highly publicized killings of unarmed black men around the country that have become a cultural and political flashpoint since the shooting of Mike Brown in Ferguson, Mo., last August. This year, police officers involved in killings of black men in North Charleston, S.C., and Baltimore were dealt murder charges.

In the wake of recent riots tied to police killings of unarmed black men by white officers, Ozanne urged Madison residents to maintain peace following Tuesday’s announcement. As the first black district attorney in Wisconsin, he said he “understands the pain” of unjustified racial profiling. But he also said his decision was based on the facts that were presented to him, not emotion.

Read next: These Two Stats Show the Big Problem With Policing in America 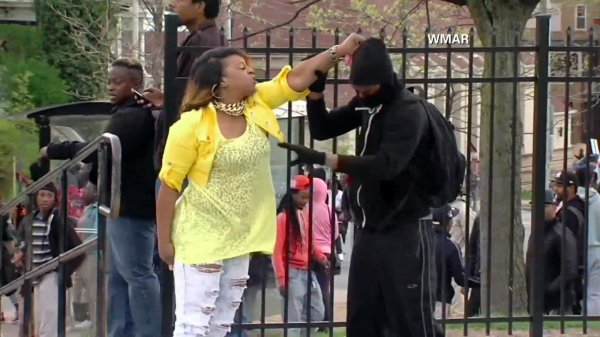 Son Smacked by Mother at Baltimore Riot: 'I Regret Going Down There'
Next Up: Editor's Pick