This 5-Minute Technique Will Get You Noticed By Important People

Last week, I scrolled though my Twitter notifications to discover that a very influential professional in the PR world—who’d co-founded one of the agencies I’d love to work for—had started following me.

For context, she has about 15,000 followers but is only following 500. I was pretty excited.

But I wasn’t surprised. You see, for the past month I’ve been doing something very specific on social media that’s helped me get noticed (and followed by!) influential people in every industry.

It only takes five minutes. It has an impressively high success rate. And the best part? It will work for anyone with a Twitter account.

First, I identify whose attention I want to attract. Then, I Google his or her name and “interview.” So if I was targeting, say, Marc Andreesen, I’d google “Marc Andreesen interview.” Andreesen is an influential venture capitalist, so there’s no shortage of articles about him.

I go with a New York Magazine interview.

My next step is to read through it and look for a cool quote. Immediately, one jumps out at me:

“I’m optimistic arguably to a fault, especially in terms of new ideas. My presumptive tendency, when I’m presented with a new idea, is not to ask, ‘Is it going to work? It’s ‘Well, what if it does work?’”

I copy and paste that into Pablo, an insanely easy-to-use free tool that lets you overlay text onto images.

Why Does This Work?

Movers and shakers are pretty darn accustomed to seeing tweets, posts, articles, and videos about themselves. But making a personalized “quotable” (as I’ve learned they’re called) about someone really breaks through the noise. It says, I think you’re so wise and so perceptive and so experienced I’ve taken the time to craft a custom image with your words on it. It’s pretty hard not to be flattered (and most people will never know how quickly you whipped that picture up).

Sometimes, the person I’m quoting won’t follow me—but he or she will retweet my post. Then I’ll get five or 10 new followers. So even when the plan doesn’t completely work, it’s still beneficial.

However, a well-chosen quote does have stand-alone value. Your followers will learn something in the two or three seconds it takes to read your tweet, which will make you stand out… and lead to more followers.

I’ve actually started doing this around once a day. When posts do especially well, I’ll even repost them two or three days later.

Who Should You Start With?

I’ve found this technique to be the most successful with people who have under 10,000 followers. Beyond that, they’re getting so many mentions and shout-outs a day your tweet loses some of its impact.

However, that doesn’t mean you shouldn’t try! Pulling the whole thing together is certainly pretty quick and low-effort, and as I said, you’ll benefit even if the person doesn’t follow you back.

But when you’re not trying to get Zappos CEO Tony Hseih (who has 2.78 million followers) to notice you, I suggest targeting:

I’ve actually started a list in Evernote of people I want to try this with; every time I come across a name, whether that’s on Twitter or LinkedIn, in a conversation, on a company site, or in an article, I’ll add it to the note. Then when I have a spare five minutes, I’ll write up my tweet.

Okay, so the best possible outcome happens, and the co-founder of your dream company follows you back.

Right away, I’d tweet, “Thanks for the follow, @JaneDoe! I’ve enjoyed keeping up with your work at @Company.”

As Lily Herman explains, “the name of the game is to be intriguing, not overbearing.” You don’t want to go through his or her feed and favorite every tweet from the last five months.

Herman recommends interacting with a person a few times a week. Here are her tweet ideas:

Hopefully, you’ll build a relationship with someone, which you can eventually leverage to take the connection offline, get connected to other influential people, or even land a job.

But even if none of those things happen, at the very least you’ll have a powerful person seeing your name, reading your updates, and learning your interests. 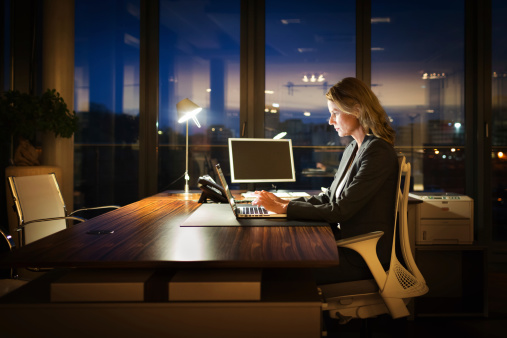 6 Things to Know Before Applying for a MBA
Next Up: Editor's Pick