You Asked: Are My Devices Messing With My Brain?

First it was radio. Then it was television. Now doomsayers are offering scary predictions about the consequences of smartphones and all the other digital devices to which we’ve all grown so attached. So why should you pay any attention to the warnings this time?

Apart from portability, the big difference between something like a traditional TV and your tablet is the social component, says Dr. David Strayer, a professor of cognition and neural science at the University of Utah. “Through Twitter or Facebook or email, someone in your social network is contacting you in some way all the time,” Strayer says.

“We’re inherently social organisms,” adds Dr. Paul Atchley, a cognitive psychologist at Kansas University. There’s almost nothing more compelling than social information, he says, which activates part of your brain’s reward system. Your noodle is also hardwired to respond to novel sights or sounds. (For most of human history, a sudden noise might have signaled the presence of a predator.) “So something like a buzz or beep or flashing light is tapping into that threat detection system,” he explains.

Combine that sudden beep with the implicit promise of new social info, and you have a near-perfect, un-ignorable stimulus that will pull your focus away from whatever task your brain is working on. And while you may think you can quickly check a text or email and pick up that task where you left off, you really can’t.

“Every time you switch your focus from one thing to another, there’s something called a switch-cost,” says Dr. Earl Miller, a professor of neuroscience at Massachusetts Institute of Technology. “Your brain stumbles a bit, and it requires time to get back to where it was before it was distracted.”

While this isn’t a big deal if you’re doing something simple and rote—making an omelet, say, or folding clothes—it can be a very big deal if your brain is trying to sort out a complex problem, Miller says.

One recent study found it can take your brain 15 to 25 minutes to get back to where it was after stopping to check an email. And Miller’s own research shows you don’t get better at this sort of multitasking with practice. In fact, people who judged themselves to be expert digital multitaskers tended to be pretty bad at it, he says.

“You’re not able to think as deeply on something when you’re being distracted every few minutes,” Miller adds. “And thinking deeply is where real insights come from.”

There seems to be an easy solution to this: When you’re working on something complicated, switch off your phone or email.

That could work for some people. But there’s evidence that as your brain becomes accustomed to checking a device every few minutes, it will struggle to stay on task even at those times when it’s not interrupted by digital alerts. “There’s something called ‘phantom text syndrome,’ ” Atchley says. “You think you hear a text or alert, but there isn’t one.”

While phantom texts can afflict adults, Atchley says this phenomenon is pretty much universal among people under the age of 20—many of whom wouldn’t recognize a world that doesn’t include smartphones. Even if you don’t hear phantom alerts, you may still find yourself reflexively wanting to check your device every few minutes for updates, which disrupts your concentration regardless of whether you ignore that impulse.

Your ability to focus aside, a 2014 study appearing in the journal PLOS One found that people who spend a lot of time “media multitasking”—or juggling lots of different websites, apps, programs or other digital stimuli—tend to have less grey matter in a part of their brain involved with thought and emotion control. These same structural changes are associated with obsessive-compulsive disorder, depression, and anxiety disorders, says that study’s first author, Kepkee Loh, who conducted his research at University College London.

Atchley says more research suggests lots of device use bombards your brain’s prefrontal cortex, which plays a big role in willpower and decision-making. “The prefrontal cortex prevents us from doing stupid things, whether it’s eating junk food or texting while driving,” he explains.

He says this part of the human brain isn’t “fully wired” until your early 20s—another issue that has him worried about how a lot of device use may be affecting children and adolescents.

So what’s the antidote? Spending time in nature may counteract the focus-draining effects of too much tech time, shows research Atchley and Strayer published in 2012. Meditation may also offer focus-strengthening benefits.

Strayer says putting your phone on silent and setting your email only to deliver new messages every 30 minutes are also ways to use your devices strategically and “not be a slave to them,” he adds.

Of course, there are plenty of benefits associated with the latest and greatest technologies. Ease and convenience of staying in touch with friends is a big one. But many open questions remain when it comes to the true cost of our digital distractions.

“Imagine Einstein trying to think about mathematics at a time when part of his brain was wondering what was going on with Twitter,” Atchley says. “People make incredible breakthroughs when they’re concentrating very hard on a specific task, and I wonder if our devices are taking away our ability to do that.” 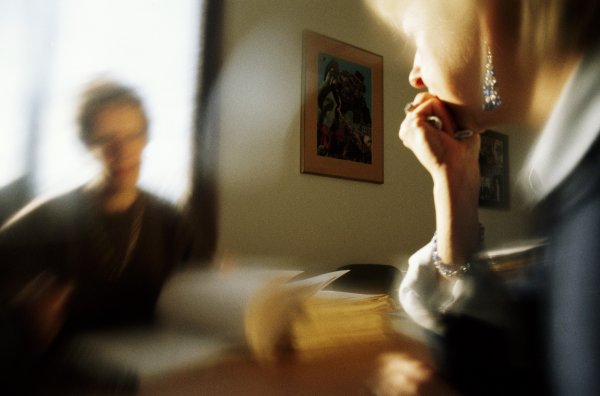 Your Therapist Is Better at Handling Emotions Than You Are
Next Up: Editor's Pick