To destroy the raw material for cocaine, Colombian police crop dusters have sprayed herbicide on more than 4 million acres of the country’s coca fields over the last two decades. But the controversial U.S.-backed program could soon be grounded in the wake of a new World Health Organization finding that glyphosate, the active ingredient in that herbicide, may cause cancer.

Citing the WHO report, President Juan Manuel Santos on Saturday urged the country’s National Narcotics Council, which is made up of government ministers, to phase out aerial spraying within a few months, a decision that the council could make as soon as Thursday. “The risk does exist,” Santos said. “We need a system that is more efficient and less damaging.”

But amid signs that cocaine production is once again surging in Colombia, a top U.S. counterdrug official staunchly defended aerial eradication. He also dismissed the WHO report on glyphosate — the key ingredient in Monsanto’s Round-Up herbicide used by agro-industry around the world — as bad science.

“Glyphosate is today perhaps the world’s most commonly used herbicide,” William R. Brownfield, who heads the U.S. State Department’s Bureau of International Narcotics and Law Enforcement Affairs, told TIME. “There is not one single verified case… of cancer being caused by glyphosate.”

However, a March report by the cancer-research arm of the WHO noted that glyphosate has been linked to tumors in mice and rats and that there is some — though limited — evidence that people working with glyphosate face a greater risk of developing non-Hodgkin lymphoma. The report by the International Agency for Research on Cancer concluded that glyphosate “is probably carcinogenic to humans.”

Unlike the controlled agricultural use of glyphosate, the Colombian aerial eradication program uses a higher concentration of the herbicide which is sprayed over populated zones and sometimes lands on people, says Adam Isacson of the Washington Office on Latin America think tank. The result has been a flood of health complaints. A nationwide study of hospital visits that was conducted by the Drug and Security Research Center at the University of the Andes in Bogota found a higher incidence of skin rashes, respiratory problems and miscarriages in coca-growing regions sprayed with glyphosate between 2003 and 2007.

“This is very solid evidence,” says Daniel Mejia, who directs the center and is also president of the Colombian government’s drug policy advisory commission.

In the coca fields of southern Colombia, peasant farmers these days tend to blame all their ailments on glyphosate. Leaning on his machete, Nittson Cuacialpud says he developed a permanent case of face acne a few years ago after crop-dusters swooped over his one-hectare coca field near the town of La Hormiga.

His neighbor, Sandra Trejo, remembers getting hit by a rain of herbicide which made her hair sticky. But she says it was hard to tell whether glyphosate was dangerous. La Hormiga and surrounding communities lack clean drinking water, overall health conditions are poor, and farmers handle a wide variety of powerful weed killers and precursor chemicals when growing coca and processing the leaves into cocaine.

“People get sick, but we don’t know why,” Trejo says.

Despite the growing controversy over glyphosate, it’s an awkward time for Colombia to be holstering a key drug war weapon. Last week, the White House Office of National Drug Control Policy released data showing the coca crop in Colombia had expanded 39% between 2013 and 2014 — the country’s first big jump in drug cultivation since 2007. That translates into an increase in potential cocaine production from 185 tons to 245 tons.

Although the 2014 White House numbers are not yet in for Peru and Bolivia, the world’s two other big cocaine producers, the sudden spike in Colombia is troubling. “A 39% jump in coca cultivation will likely increase cocaine supplies, thus lowering street prices,” Isacson said.

Brownfield pointed out that many areas of Colombia, such as the southern border with Ecuador, national parks and Indigenous reserves, have recently been placed off limits to aerial eradication and that coca growers have taken advantage. During its peak years in the mid-2000s, Brownfield said the spray program helped reduce Colombia’s coca crop by 60%,

Yet critics slam aerial eradication as costly and counterproductive. In fact, Colombia is the only country that allows it. In Peru and Bolivia, coca plants are uprooted by anti-drug agents with shovels and machetes. In Colombia, similar efforts have left 62 people dead and hundreds injured because left-wing FARC guerrillas, who are deeply involved in drug trafficking, often protect the fields with land mines and snipers. That’s why Colombia opted for air raids.

But in a 2011 study, Mejia estimated that keeping 1 kilogram of cocaine out of the United States costs $163,000 in coca eradication efforts. By contrast, that cost dropped to $3,600 per kilo by attacking smugglers getting the drugs into the U.S.

There has also been diplomatic and legal fallout. In 2013, Colombia paid a $15 million settlement after Ecuador filed a lawsuit in the International Court of Justice claiming that the herbicide drifted across the border, causing environmental damage, livestock deaths and health problems in humans.

In calling for an end to aerial eradication, President Santos insisted that other counter-narcotics efforts would continue. However, his overriding strategy is to disarm the FARC guerrillas. The two sides are negotiating in Cuba to end the 51-year-old war and if a final peace treaty is signed, the government has agreed to halt aerial eradication while FARC has promised to get out of the illegal drug trade.

So in spite of his strong support for the air raids, Brownfield, a former U.S. ambassador to Colombia who was once doused in glyphosate while observing a spray operation (and remains cancer free), acknowledges they may end soon. “Change is not necessarily a bad thing,” he says. 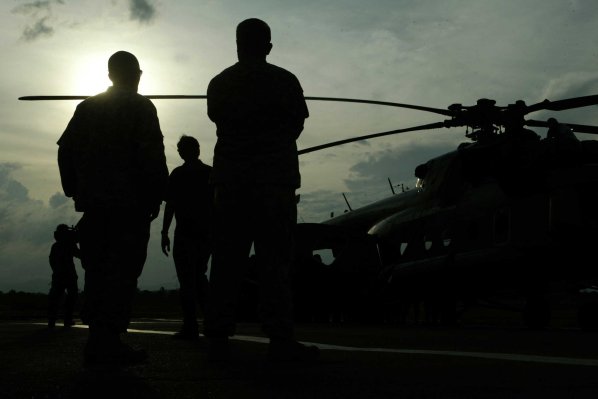 Colombians Accuse U.S Soldiers and Officials of Sexual Assault and Rape
Next Up: Editor's Pick