Why America Wants a Third Sex and the City Movie

As often happens when Sarah Jessica Parker does anything, speculation ramped up yesterday that a third Sex and the City film is imminent. The actress posted to her Instagram a shot of her filming an unnamed project outside the department store Bloomingdales. It was immediately interpreted as a hint that Parker was reprising her role as prolific shopper Carrie Bradshaw. Us Weekly‘s coverage of Parker’s appearance indulges in fevered speculation about Sex and the City 3—before noting that a studio representative denies the movie’s existence.

It seems most likely that Parker, now a shoe designer who’s spent much of the past year promoting her designs across the world, is collaborating in some capacity with the department store. That’s definitely likelier than the idea that Sex and the City 3 was greenlit in secret and promotion is now underway. But Parker, like her three Sex and the City castmates, hasn’t been able to dodge the question about a third installment in the series in the five years since Sex and the City 2 came out. All four women are asked about it in practically every interview they do about any other project. Parker’s traditional answer, one variation or another on the idea that there is “one more story to tell,” is vague enough to be encouraging, and also speaks to a general sense that the franchise needs closure.

The second Sex and the City film was widely viewed as not just worse but substantially different from the series, taking place as it did in the United Arab Emirates and abandoning most of the show’s central romantic relationships in favor of lurid materialist excess. A third film would provide the franchise an opportunity to right itself, and to ensure that the final moments of the story of Carrie Bradshaw and her friends aren’t spent on a strange tangent.

But if they are, so what? Popular though it may be to deride Sex and the City 2, the movie didn’t actually detract from the quality of the much-loved HBO series. And the presumption that, after a half-decade hiatus, the creative team involved in the Sex and the City movies (specifically, writer/director Michael Patrick King) would grow more in touch with contemporary reality is a very optimistic one.

What fans loved about Sex and the City, among much else, was its deep understanding that women over a certain age have the right to define, and re-define, themselves: All four of the women in the show’s central quartet had romantic and professional lives far more complicated than they were supposed to. In the final moments of the first Sex and the City, Carrie made this explicit, saying, “Maybe when we label people—bride, groom, husband, wife, married, single—we forget to look past the label to the person.”

There’s more to that line than iffy writing. Perhaps it’s time for fans of the Sex and the City franchise to allow the show’s four stars, all of whom work far more than most actresses over 40, to move on with their lives—to allow Parker and her cohort to get excited about a new venture without dredging a nearly-20-year-old show out of the closet. Fans’ close identification of Sarah Jessica Parker with her character is coming dangerously close to the sort of labeling Carrie herself always rejected.

Currently, Parker is telling the story of an entrepreneur monetizing her fame and her interest in fashion. That’s not an end to the Sex and the City saga, but it’s interesting enough to stand on its own. 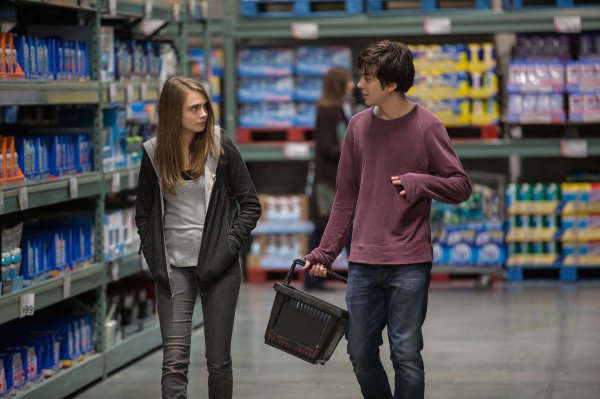 Watch the Latest Trailer for Paper Towns
Next Up: Editor's Pick