In this March 3, 2015 file photo, President Barack Obama, accompanied by first lady Michelle Obama, speaks in the East Room of the White House in Washington.
Jacquelyn Martin—AP
By Maya Rhodan

The Barack Obama Foundation announced Tuesday that the monument to Obama’s legacy as the nation’s first black president will be built on the South Side of Chicago.

Chicago Mayor Rahm Emanuel and chair of the Barack Obama Foundation Martin Nesbitt were due to announce more details at a press conference later Tuesday. An exact location for the park has not yet been chosen, but it will be built on one of two parks–Jackson and Washington, both of which are located just south or west of Hyde Park, the urban oasis the President and First Lady called home prior to moving into 1600 Pennsylvania.

The foundation plans to work with all four schools to host some of the president’s archives but ultimately, the foundation selected the South Side of Chicago, where President Obama planted his roots as a community organizer and politician.

“With a library and a foundation on the South Side of Chicago, not only will we be able to encourage and affect change locally, but what we can also do is to attract the world to Chicago,” President Obama said in a video released Tuesday:

A 2014 study from the University of Chicago found that the library would be an “economic boon” for the city, attracting some 800,000 visitors a year, creating 1,900 permanent new jobs and generating $220 million in annual revenue. In all, the report found the library’s construction would boost Chicago’s economy by $600 million and create 3,280 new jobs.

But the city faced an uphill battle to secure the parkland as the home for the future library; ultimately state lawmakers passed a bill to allow the city to build on parkland–which some park historians objected to. Some residents of Washington Park worry, however, that the library could kick out mom-and-pop shops that have existed in the community for decades.

In the video, the President and First Lady said the neighborhood “means the world” to their family.

“All the strands of my life came together and I really became a man when I moved to Chicago,” President Obama said. “That’s where I was able to apply that early idealism to try to work in communities in public service. That’s where I met my wife. That’s where my children were born.”

“Every value, every memory, every important relationship to me exists in Chicago,” said First Lady Michelle Obama, who was born and raised in the city. ” I consider myself a South Sider.”

The Foundation said in a press release that the potential economic boost, as well as the South Side’s connection to transportation, University of Chicago activity, and the Obama’s personal history were all instrumental in cementing the neighborhood as the final destination. It said it intends to open offices on the South Side by the end of 2015 dedicated to pursuing community partnerships and opportunities for economic development in the area. 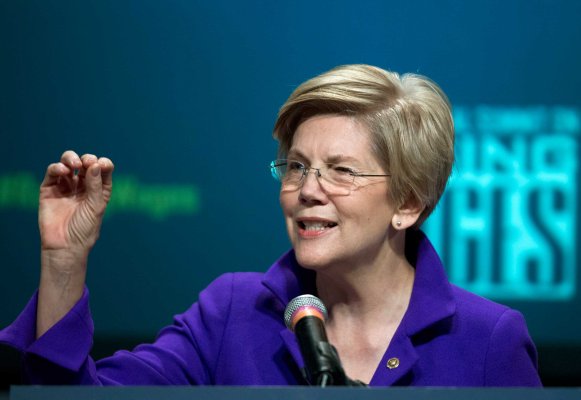 Warren Bashes Obama as Trade Deal Feud Heats Up
Next Up: Editor's Pick