A Century After Its Inception, African American History Museum Looks Ahead

A mother stoops down to be within earshot of her puffy-pigtailed daughters. Before them stands an oval table enclosed in a glass case. The smaller of the two children stretches a tiny finger toward the yellowing lace covering the caramel-colored wood. It’s likely the table looks like any number of tables those little girls have seen in their lives. To me, it looks like the one where I eagerly placed silverware as a child, while my grandma shouted the multiplication tables from her South Side Chicago kitchen. It’s a table around which any family could discuss the mundane aspects of daily life–the neighbors, the post office. Which is kind of the point, really.

On Friday, “Through the African American Lens: Selections from the Permanent Collection” opened in the National Museum of American History in Washington, D.C., offering a preview of what’s to come when the Smithsonian’s National Museum of African American History and Culture opens in 2016. The actual building is about a year and a half away from completion, but the artifacts on display are a peek at the tens of thousands that the Smithsonian has gathered over the past decade of planning for the new institution. The show is a preview of what visitors will see when the museum opens: a tent from a civil war camp, a necktie owned by Harriet Tubman, an organ owned by James Brown, notes from a Virginia midwife and dresses by designer Ann Lowe.

And the table, of course, which isn’t just any old table. It belonged to Lucinda Todd of Kansas, who served as a secretary of the Topeka Chapter of the National Association for the Advancement of Colored People (NAACP). Todd was one of the 13 plaintiffs who fought for the desegregation of schools in the landmark case Brown v. Board of Education of Topeka. That table was where the NAACP Legal Defense Fund convened to prepare for the historic case. In presenting artifacts like it, the museum’s curators hope to highlight the ties between history’s trailblazers and ordinary Americans–a link that has come to have extra meaning in recent weeks.

“You think about what a simple table tells us about hope, about community, about family, but also about the strategy that is so integral to change in America,” says Lonnie Bunch, director of the National Museum of African American History and Culture.

The Smithsonian Institution’s latest museum has been a century in the making. In 1915, a group of black Civil War veterans began pushing for a memorial and museum dedicated to black service members. A little over a decade later, President Calvin Coolidge approved the construction of a building to serve as a “tribute to the Negro’s contributions to the achievements of America,” according to the Smithsonian Institution. Thanks to the Great Depression, that building never came to fruition.

For decades, lawmakers mulled the idea of a museum, noting the impact African Americans have had on the nation, only for the plans to falter. Some argued the National Mall was too crowded, others worried every minority group would want or need a museum. “Once Congress gives the go ahead for African-Americans,” Republican North Carolina Sen. Jesse Helms said in 1994, according to the New York Times, “how can Congress then say no to Hispanics, and the next group, and the next group after that?”

In 2001, a bipartisan coalition of lawmakers led by Rep. John Lewis of Georgia came together to push for the museum’s development. After two years of reports and meetings across the country, Congress was able to pass a law that established the National Museum for African American History and Culture. The last decade has been spent turning that agreement into reality.

“When we started, we didn’t have any collections at all. And now, over the last decade, we’ve collected 40,000 artifacts,” Bunch says.

Many of the pieces of American history the museum staff has collected have come from everyday Americans, curious about whether or not an old photo or shawl could be of use. Just because a donor wasn’t famous doesn’t mean an artifact isn’t important; in fact, pieces from ordinary people are given pride of place in many instances.

“We’re trying to start conversations and share stories that haven’t been told,” co-curator Rhea Combs said during a tour of the exhibit on Friday.

The mission of the exhibit and the museum is to show that the African American experience is a fully American one.

But that shared American narrative has often been a tense one, and the museum is moving toward fruition at a time when the African American experience–the part that isn’t necessarily shared by other groups–is at the forefront of the national consciousness. African American citizens who never asked to make news have shaped the country’s recent conversations.

Accordingly, though the stories of places like Ferguson, Mo., and Baltimore are still being written, the museum is already in the process of collecting artifacts, images and even tweets that mark the latest chapter in the story of race in America. So far, they’ve got a gas mask worn in Ferguson and a hoodie worn during the protests following the death of Trayvon Martin.

The African American History Museum, when it opens, will aim to showcase history in motion. But for now, it’s merely a snapshot. 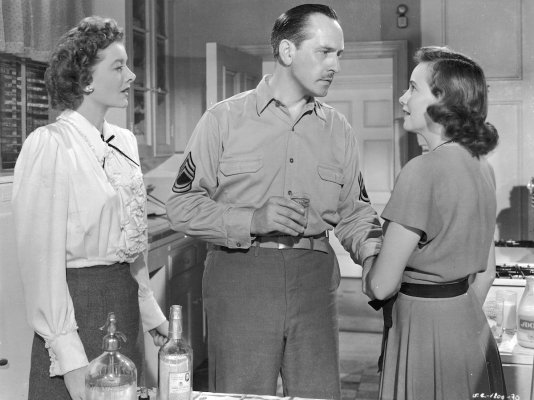 The True Story That Inspired One of the Biggest Films of the 1940s
Next Up: Editor's Pick