In 2008, Hillary Clinton lost the Democratic nomination to Barack Obama when he hammered her on her vote in favor of going to war in Iraq. Now, former Rhode Island Gov. Lincoln Chafee wants Clinton to keep paying for that vote in 2016.

Chafee, a Republican turned Independent turned Democrat, is running against Clinton for the Democratic nomination. He hasn’t officially announced yet, he’s still in the exploratory phase, but making it official is something he “plan[s] to do soon.” And when he does, he’s going to make Clinton’s vote for war his central argument against her.

“I always go back to what I call one of the biggest mistakes in American history, the decision to go to war in Iraq,” he told TIME, “and the judgment call made by Senator Clinton.”

Chafee was a Senator at the time too; he served as a Senator from Rhode Island from 1999 to 2007 before he became governor. He voted against the war, and he says that split between him and Clinton highlights a fundamental difference in their common sense.

“That was a critical time in American history, October of 2002, and I made a different judgment call,” he said, again referring to Clinton’s vote in favor of the war. “I think we should have a debate, not only as the Democratic Party first of all, but also in America about where we’re going on in the world and who can make the correct judgment calls as we go forward.”

Even Clinton has publicly regretted her vote. In her 2014 book Hard Choices, Clinton wrote, “I thought I had acted in good faith and made the best decision I could with the information I had. And I wasn’t alone in getting it wrong. But I still got it wrong. Plain and simple.”

Although this linchpin of Chafee’s burgeoning campaign happened over a decade ago and was already used at the center of the 2008 election, Chafee says the so-called “biggest mistake” will resonate just as much with voters today.

“We’re still paying for it,” he said, saying the war will end up costing the country $6 trillion. “We’re paying for it financially in taking care of our brave veterans … but we’re also paying for it overseas … The repair work goes on. It’s relevant to today.”

But polling data shows that voters may not agree. In 2008, a Gallup poll found that Americans cited Iraq as the second most important issue facing the country, behind the economy. In 2015, Gallup separated economic concerns from non-economic issues, but even in the non-economic poll the situation in Iraq came in 15th, after issues like race relations, immigration and education. (No. 1 was dissatisfaction with government.)

Chafee outlined some other policy positions: he supports the Affordable Care Act, he would vote for the Trade Promotion Authority, he supports a path to citizenship for illegal immigrants. But he kept coming back to Iraq.

Chafee faces a steep uphill battle towards the nomination; so far he’s barely even been included in Democratic primary polling.

He said his biggest challenge will be “getting out to every possible potluck supper and gathering in Iowa and New Hampshire and other states.” But, “I look forward to it, meeting the people. I started my career at the local level … by going door to door … It’s going to be no different in this campaign.” 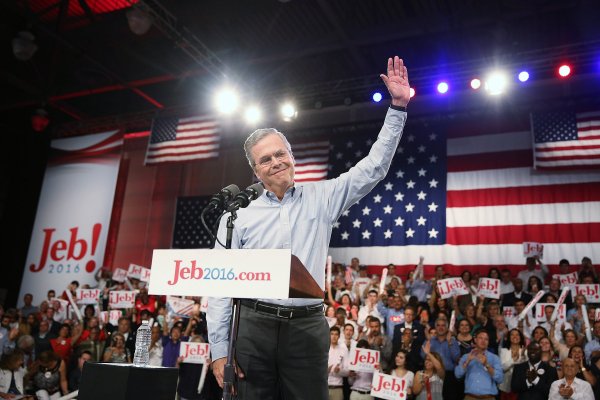 See the 2016 Candidates' Campaign Launches
Next Up: Editor's Pick