In a just-started summer movie season defined (at least so far) by killer robots chasing the Avengers, a very different form of A.I. is gaining fans.

Since it opened in limited release April, Ex Machina, the directorial debut of screenwriter Alex Garland, has been quietly chugging along. This weekend, the film expands to 2,000 screens nationwide, a rare slow-burn expansion in an age that far more often sees movies live or die by their opening weekend.

It helps that Ex Machina has particularly provocative ideas about the world around us. Garland’s film depicts a near-future in which a reclusive tech founder (played by Oscar Isaac) has created an intelligent robot (Alicia Vikander), and wants to test whether or not she’s distinguishable from a human, as traditionally defined. What unfolds after a young engineer (Domhnall Gleeson) arrives to perform a modified Turing test, and as all three characters’ motivations shift, has the potential to change the course of life on earth—and, in our world, to inspire a set of smarter sci-fi movies. In this exclusive featurette, Garland and his cast describe the ideas underpinning the plot and the process of putting together a visually compelling robot; Garland himself helped to design the complex robot Ava.

Garland, whose writing career includes the screenplays for 28 Days Later, Sunshine, and Never Let Me Go, spoke to TIME about why he can’t stop making creepy sci-fi, what he thinks of real-world A.I. as a threat, and what project is up next.

TIME: This film has a pretty dim view of what’s in the very near future, or already going on. Do you think people are more frightened of technology today than they’ve been in the past?

Alex Garland: I think that we have a very, very long history with being scared of technology that you could take back to Luddites smashing machinery. Science and technology change paradigms. That makes people nervous. I think that’s always been the case. There’s plenty of scientists who’ve been executed who’d bear witness to that. Right now, we have a particular kind of paranoia and fear of technology that’s largely related to its ubiquity. The fact that it’s so much a part of day-to-day life in the west, and not just the west. I was in Myanmar a few weeks ago, and they had modern mobile phone networks arrive about two years ago. It’s incredible, the people you see glued to tablets and phones, scrolling through newsfeeds and sending messages. It’s very, very global and we have a strange relationship with that. We feel tech companies are opaque and we’re not opaque.

Are you afraid of technology?

It’s a complicated thing. Apart from the issues related to Snowden and whispers and rumors of other types of things, I don’t see huge evidence for any terrifically malevolent tech companies or enterprises. That may be very naive of me. That doesn’t stop me from feeling concerned. It’s not a concern to do with tech, it’s a concern to do with power. I’m not sure meaningful oversight exists.

Many people have speculated that BlueBook, the company at the center of the action in Ex Machina, is based on Facebook or Google.

It’s not based on any specific company. It’s based on a large tech company. It could stand symbolically representing either of those companies or any large company, Microsoft or Apple as easily.

How do you feel about the scene of Oscar Isaac disco dancing—something that’s fairly incongruous with the general mood of the film—and the degree to which it’s become an internet favorite?

As a film watcher, I would typically want to know as little as possible before I went in. If you don’t know about that scene, it’s much more out of left field. It’s more jarring and plays a stronger role. But I also know how films are marketed, which is to say—they are marketed. This is a difficult little film; it’s not easy. I don’t begrudge it. If I was a viewer, I would tend to avoid information about films as much as possible.

Do you have any interest in moving over to franchise fare, as many directors of thinky, smaller sci-fi projects tend to?

I think it would sort of depend on whether one can put a stamp on it. I have been working in film for 15 years. I’ve done work for hire on the kinds of films you’re talking about—which is to say, large studio movies. It’s not something I feel judgment about. I think I enjoy watching those films as many other people do, self-evidently. The issue for me is more that this is, depending on what one would count, the fifth or sixth movie I’ve taken to theatrical release. They tend not to be successful in mainstream terms. That suggests I don’t have a mainstream sensibility. It’s not a judgment, it’s more just trying to play to my strengths. No matter what happens [with Ex Machina], our entire run will be a very small fraction of the first day of The Avengers.

What does the future hold, then? Is it sustainable to keep making movies at the scale of Ex Machina?

This isn’t coyly self deprecating: I’m continually surprised I continue to work. Actually, between 28 Days Later, which is a film I worked on something like 13 years ago, and this film, I’ve had a string of movies that dramatically underperformed at box office. That usually means you don’t get to do it again. I feel like I’ve been hustling for a long time to get things made.

Do you have any position on whether artificial intelligence will overtake humanity? Your movie makes it seem inevitable.

I think it’s plausible. The question is how one feels about that. It’s not something you could say definitely will happen. It’s an unknown. It’s plausible. There’s plenty of people who are concerned about it who are not reflexive paranoiacs. It’s not one I particularly share, but I see the argument.

I don’t wait for that. I self-generate the project. Even if it’s an adaptation of a novel, I’ll set the project in motion in key regards. This time, one of the producers I worked on had a novel and asked if I could read it, and now I’m trying to [adapt] that. It’s a novel by an American writer named Jeff VanderMeer called Annihilation. [Reportedly, Natalie Portman is in talks for the lead role.] I’m in process of trying to get that made now.

Annihilation is, like your other work, fairly creepy sci-fi. Don’t you ever want to do a comedy?

I’d love to do a comedy; I just don’t think I’m capable of it. I think there’s a case you could make that comedy is the hardest form of cinema to pull off. It’s incredibly difficult. I love John Hughes movies like The Breakfast Club, with real heart in them and naturalism. So it’s not that I wouldn’t like to do it, I just dont think I’d be good. 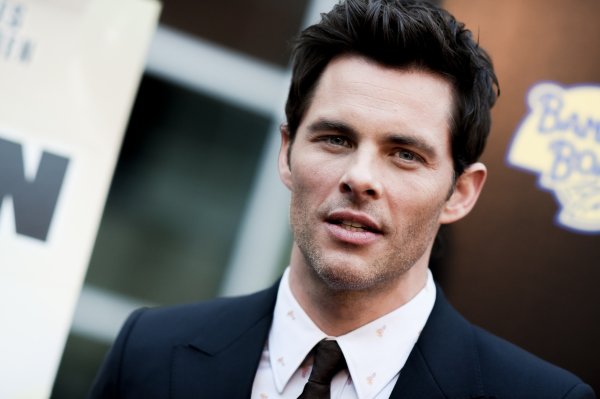 James Marsden: The D Train's Big Plot Twist Is Not 'A Cheap Punch Line'
Next Up: Editor's Pick