Never mind stationery or fashion accessories. Hello Kitty’s cute face now stares back at you from the bottom of your bowl, in the form of dumplings and other kinds of dim sum in the world’s first Chinese restaurant inspired by the cartoon character.

“Hello Kitty is more popular in Hong Kong than in [her native] Japan,” restaurant owner Man Kwong tells TIME. This may be true — the city, after all, is even home to its own Hello Kitty organic farm. Fans will squeal when looking at the Hello Kitty–shaped dim sum platters: her flour bow is colored with beetroot, her eyes dotted with squid ink, and her soft skin is made with high-quality flour. Man Kwong, who goes by his pen name, wanted to stick to all-natural ingredients because, as the founder of a Chinese-language health magazine, clean eating is important to him. He sees the restaurant as a healthy, family-friendly space.

Opening the diner, wedged into the traditional Yau Ma Tei neighborhood on the Kowloon peninsula, was an onerous process. Man Kwong, a first-time restaurateur, started negotiations with Sanrio, the company that owns Hello Kitty, in late 2013. He finally got Sanrio on board in April 2014.

Man Kwong experimented with hundreds of different iterations of dim sum and Sanrio executives had to approve each dish before the final menu was drawn up. It now consists of 37 items ranging from fresh shrimp buns to stir-fried beef and noodles. Making the items can be laborious: there are 17 different steps in creating the buns alone.

Sanrio launched Hello Kitty in 1974 as a female character living, perhaps implausibly, in England — then the romanticized travel destination of many young Japanese schoolgirls. Forty years later, the Hello Kitty brand has blossomed into a $7 billion-plus franchise, licensed to everything from commercial airliners to Italian wines.

Now, the pink-bowed fur ball is emblazoned on Chinese restaurant mirrors, faux wood screens, teapots and chopstick holders, while pictures of her as the Four Beauties of ancient China adorn the walls.

The official launch will be on June 1. Expect lots of shrieking young girls taking photos of their dinners. 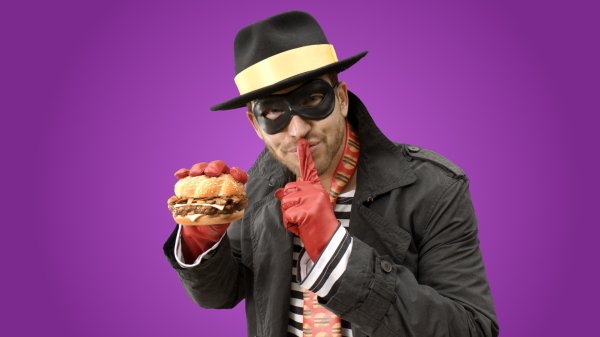 The Internet Can't Decide if the New McDonald's Hamburglar Is Hot or Creepy
Next Up: Editor's Pick