Welcome to the Whitney’s New Home

Internal combustion: The new Whitney isn’t a marble temple. It’s a machine for showing art, and once you’re inside, it fires on all pistons.
David Leventi for TIME
By Richard Lacayo

For more than 30 years, the Whitney Museum of American Art has been bursting at the seams. It was 1985 when the museum unveiled its first proposal for an addition to its Marcel Breuer–designed headquarters on Manhattan’s Upper East Side. A bombastic Michael Graves design, it was squashed by opposition from neighbors and preservationists. Later schemes from architects Rem Koolhaas and Renzo Piano met the same fate. At that point the Whitney leadership decided simply to vacate Breuer’s quirky-lovable castle keep and have Piano build something new–and much bigger–downtown.

Seven years and $422 million later, the new Whitney is here, and it’s a mixed bag–an eight-story quasi-Cubist canister of glass and bluish-white steel. On its western side, facing the Hudson River and busy West Street, it does the skyline no favors. The ribboning steel panels may accord with the industrial language of the building, but the boxy forms are lumpen and the bland panels inert. Lumpen? Inert? From Piano, the master of all things luminous and fine-boned? But wait–it gets better.

The ground floor is surrounded by glass on three sides, bringing glimpses of street life indoors and opening views out to the Hudson. On its eastern side, the Whitney plays call-and-response with its new neighborhood, the Meatpacking District, a place where there’s no longer much meatpacking but plenty of boutiques, destination dining and condos for the would-be of-the-moment wing of the 1%. Because the gallery floors get shorter as the museum ascends, the exterior stair steps back from the streets with a bounding energy. Exterior metal stairways, like cantilevered fire escapes, connect a café terrace with outdoor sculpture terraces that extend from the upper galleries. Those look down on the southern end of the High Line, the hugely popular promenade inserted onto what was once an elevated rail bed. As part of the endlessly circulating spectacle that is Manhattan, people going up- and downstairs at the foot of the park can watch other people do the same along the outside of the museum. Piano enlists the city as an auxiliary road show: people looking at people looking at people.

So this is not Piano working in his elegant neo-Classical idiom, the one he brought to the impeccable Nasher Sculpture Center in Dallas and his addition to the Art Institute of Chicago. It’s Piano harking back to the pulsing machine aesthetic of his first triumph, the Pompidou Centre in Paris, which he co-designed with Richard Rogers. Step inside and find elevator cables visible behind glass, pine floors reclaimed from old factory buildings, steel-rail ceiling grids made to hang temporary walls and skylights that offer views of rooftop cooling units. Details like those do another call-and-response–with the industrial character of much of the collection, the milled steel of a Donald Judd, the lead panel of a Richard Serra. This museum isn’t a marble temple. It’s a machine for showing art, and once you’re inside, it fires on all pistons.

The new Whitney is also the Whitney unchained, with enough room at last–50,000 sq. ft. (4,645 sq m) of indoor gallery space, compared with 33,000 sq. ft. (3,065 sq m) in the old building–to display a fair slice of its collection. It now has the chance to be a real counterweight to the Eurocentric take on art history at the Museum of Modern Art uptown, which scarcely knows what to do with American art before Abstract Expressionism.

The Whitney is already showing what it can do in its giant debut show, “America Is Hard to See,” open through Sept. 27. With more than 600 works from 1900 to the present, all drawn from the permanent collection, it unearths things we haven’t seen for a long time, if ever, and it’s full of grace notes and surprises. It makes the past look interesting in new ways. The future looks that way too. 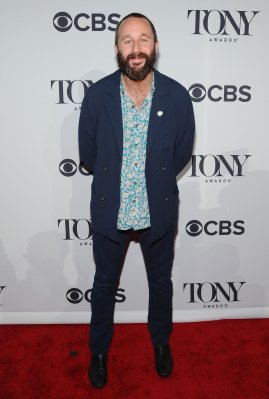 10 Questions With Chris O’Dowd
Next Up: Editor's Pick