Barcelona's Lionel Messi celebrates his first goal against Bayern Munich in the UEFA Champions League Semi Final First Leg at The Nou Camp in Barcelona on May 5, 2015.
Gustau Nacarino—Reuters
By Noah Rayman

Barcelona forward Lionel Messi scored a pair of goals in Wednesday’s Champions League semifinal match against Bayern Munich that didn’t just secure the win, but and put him ahead of another soccer legend for the most goals scored in the competition.

It was on Tuesday that Cristiano Ronaldo of Real Madrid took the record, Sports Illustrated reports, with his 76th goal coming in a game against Juventus. But Messi came roaring back Wednesday with two beauties, pushing his total to 77.

Both players will have at least one more chance to this competition to boost their numbers. Bayern and Barcelona will go head to head next Tuesday, while Real Madrid and Juventus will play the following day. The Champions League final takes place in Berlin on June 6. 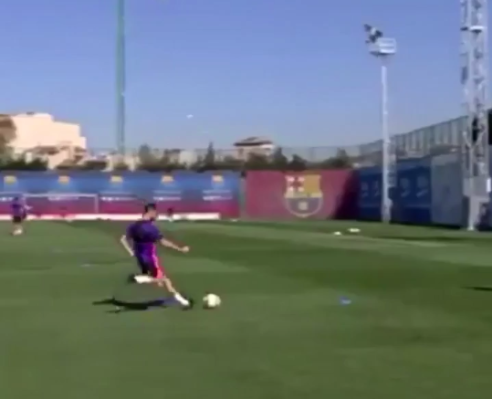 Watch a Barcelona Player Kick a Soccer Ball Into a Basketball Hoop From Far Away
Next Up: Editor's Pick