It’s a bird. No, it’s a plane. It’s Superman. No wait, it’s Supergirl! And she’s officially landing a series order at CBS.

The new series stars Glee alum Melissa Benoist as Kara Zor-El, who escaped Krypton amid its destruction years ago. Since arriving on Earth, she’s been hiding the powers she shares with her famous cousin. But now at age 24, she decides to embrace her superhuman abilities and be the hero she was always meant to be.

Supergirl hails from Arrow and Flash executive producer Greg Berlanti and The New Normal’s Ali Adler, who will write and executive-produce with Arrow and Flash boss Andrew Kreisberg and Sarah Schechter.

The drama is one of CBS’s relatively new efforts to venture outside of its standard crime procedural comfort zone. The network is diving into the super-hero genre, which has made such a strong impact in both movies and—over the last few years—at its TV rivals, particularly CBS’s younger-skewing sister network The CW. One question is whether fans of NCIS and Criminal Minds will embrace the network getting into DC Comics territory. CBS won’t say if the show will air in the fall or midseason, but will almost certainly announce that decision at its upfront presentation in New York next week.

The series marks Berlanti’s third superhero project guaranteed to be on the air next season, though the Arrow–Flash spin-off will likely tip that number up to four. The one-hour drama is just one in a long line of comic book properties either coming to or currently on television. For its part, Warner Bros. has Arrow, The Flash and Gotham already renewed, while midseason entry iZombie is looking strong. Constantine, on the other hand, has burned out in the ratings (though is still officially under consideration for next season). The studio also has Titans and Lucifer in contention at other networks. Over at Marvel, ABC will likely renew Agents of S.H.I.E.L.D., while the fates of Agent Carter and the Adrianne Palicki and Nick Blood-starring S.H.I.E.L.D. spin-off are still up in the air. Netflix also has Daredevil, Jessica Jones, Luke Cage, Iron Fist and the subsequent team-up project The Defenders.

Though Supergirl will be airing on The CW’s parent network, Berlanti has already gone on record to say that the heroine exists in the same universe as the scarlet speedster and emerald archer, so we could be in for an epic cross-network crossover with The Flash and Arrow—and the superhero team-up spin-off, should it move forward. 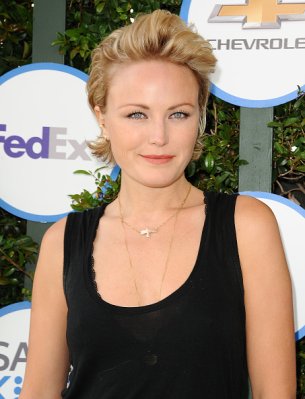