Showtime and HBO Among Those Hit With Lawsuit Over Pacquiao Injury

Manny Pacquiao during press conference after the title unification fight vs Floyd Mayweather in Las Vegas on May 2, 2015.
Robert Beck—Sports Illustrated/Getty Images
By Eriq Gardner / The Hollywood Reporter

Manny Pacquiao’s failure to check a box that he was injured is creating a rain of class action litigation. Five lawsuits have already been filed. Perhaps the most unusual one comes in Illinois where the plaintiffs are not only suing Pacquiao’s promoter Top Rank and his adversary Floyd Mayweather, but also Showtime, HBO, AT&T, Comcast and DirecTV.

A judge will have to decide whether the plaintiffs really have standing to sue on allegations that Pacquiao’s shoulder injury was concealed, but in the meantime, those who paid between $89 to $100 to watch the fight on pay-per-view are now alleging their own injuries. The lawsuit seeks $300 million in damages over an event labeled as “Fight of the Century” with no disclosure about Pacquiao’s injury.

According to the lawsuit, “If any of Defendants, between April 4, 2015 and May 2, 2015, had disclosed that Pacquiao, the underdog, had injured his right shoulder, or had suffered a torn right rotator cuff during training, or had been recommended to rest for 30 to 40 days beginning on and around April 6, 2015, or that his right arm was at an estimated 60% of full functioning, they would not have realized the number of pay-per-view purchases they were anticipating.”

Exactly what legal obligations do broadcast outlets with sports telecast rights have in advance of an event?

The lawsuit filed by attorneys Robert Duncan and Thomas Cronin makes the uphill case that those obligations are extensive.

HBO and Showtime are alleged to have committed negligent misrepresentation by failing “to determine and disclose, though it knew or should have known, that Pacquiao had injured his right shoulder” or by continuing to promote the fight as “The Fight of the Century” “even though it knew that Pacquiao was injured and likely unable to compete with boxer Mayweather.”

Showtime had no comment while Daniel Petrocelli, an attorney for Top Rank, has put out a statement, “The lawsuits are factually wrong and legally wrong, and we expect they will be dismissed in due course.”

Meanwhile, there’s still other class action lawyers who are swinging their fists in a different direction.

One lawsuit in Missouri targets Charter Communications over a cable outage that prevented customers in the St. Louis area from watching the fight. According to that lawsuit, these individuals “were outraged by their inability to watch the fight that they had paid for.” 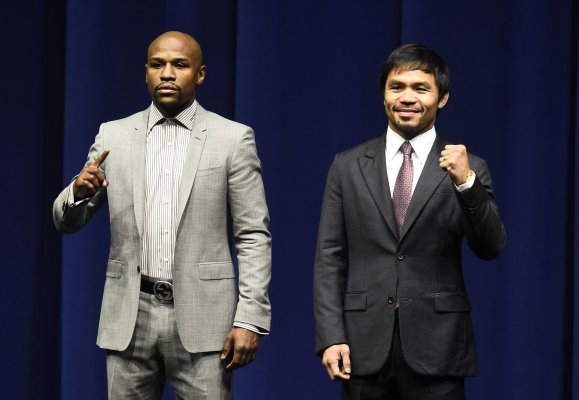 Here's What Floyd Mayweather Has to Say to All the Haters
Next Up: Editor's Pick