According to a new study, couples who have recently become parents believe they spend more hours in childcare than they actually do. And couples who intend to divide up childcare equally before their kid is born rarely achieve that balance once the baby arrives.

Researchers from Ohio State University interviewed 182 professional level couples before they had their kids and after. They also asked them to keep time diaries, which log how they spend their hours each day. The results might hold a clue as to why it’s harder for women to become business leaders, a subject that has been under much scrutiny in the last five years. But it also might provide ammunition in the so-called chore wars, because it suggests both men and women—but especially men—do less than they think do.

“Most modern couples want to share the duties and rewards of work and family equally,” says the study, which was prepared for an online symposium on housework, gender and parenthood (just in time for Mother’s Day!) hosted by the Council on Contemporary Families. And indeed before children enter the picture they divide up the labor pretty well. Men and women both report working about 45 hours a week and spending a further 15 hours a week each doing housework. This is borne out by their time-use diaries, which are a self-kept record of what activities took up their day. “Before the babies were born, most couples had achieved a balanced division of labor,” says the briefing paper.

When interviewed during their pregnancies, nearly all the couples had expected that balance to continue after their family grew by one member. “More than 95% of both men and women agreed that ‘men should share with child care such as bathing, feeding, and dressing the child’ and that ‘it is equally as important for a father to provide financial, physical, and emotional care to his children,’” the study says.

So both men and women felt like they had reduced their time at the office. Dads felt as if they had picked up the slack around the house, more than doubling the time they spent doing chores, and then adding in 15 hours childcare as well. The women reported doing less housework than men, but a lot more childrearing.

Turns out, they were both wrong. According to the detailed time diaries that the participants kept, they women spent on average 12 hours less looking after the kids than they thought they did (15 hours). Even if playing and reading with baby—not strictly laborious—were included, women still spent six hours less with their kids than they had reported. Similarly, they were only doing about half as much housework as they guessed (13. 5 hours). Where did all the time go? The women spent 42 hours doing paid work— six hours more than they thought they spent in their jobs.

Dads’ estimates were even further off: they did about 10 hours of physical child care, about two thirds of what they had reported. They put in 46 hours of paid work —five hours more than they reported and more than they did before they had a child. But it was their estimate of housework that was the furthest off-base. “The time diaries revealed that on average the men did just nine hours of housework—only one-fourth as much as they thought they were doing,” says the report.

The authors, who were more interested in getting better access to reasonably priced and workable childcare than settling marital disputes about who’s not pulling their weight around the home, note that the eight extra hours a week could really add up. “Women’s total weekly workload increased from 56 to 77 hours across the transition to parenthood, while men’s increased from 59 to 69 hours,” says the study. “Thus, over the course of a year, our calculations indicate that parenthood increased women’s total workload by about 4 ½ weeks of 24-hour days, whereas parenthood increased men’s total workload by approximately 1 ½ weeks—a 3-week per year gender gap.”

The study is very small, and not nationally representative, but it does offer an intriguing perspective on the different impact being a parent has on men’s and women’s lives even in an era when equality is generally recognized as important. The danger is that if women feel overwhelmed they may decide to give up working outside the home.

Why is that a danger? “When a woman quits work, reduces hours, or takes a less-challenging job, she sacrifices earnings, raises, promotions, unemployment insurance, and pension accumulations, thereby undermining her future economic security,” writes Stephanie Coontz, Co-Chair and Director of Public Education at the CCF. “She is also less to likely to have the kind of work continuity that has been found to protect a woman’s mental and physical health better than part-time work, staying home, or experiencing frequent bouts of unemployment.”

Moreover, it further tips the balance of household labor away from the dads. Men feel even more pressure to work to make up for lost income, which leads to women taking over an increased share of the parenting and kids seeing less of their dads. Another paper prepared for the symposium shows that men’s contribution to the share of household work has increased markedly in every country studied, but clearly, the inequities remain.

Is there a solution? Perhaps, but it might involve some tense conversations. “We would argue that men and women should openly confront the workload inequities that develop in their child’s first nine months,” say the Ohio State authors, “because renegotiating the division of labor once routines are established is really difficult.” Alternatively, all new parents could keep a time-diary. Because they don’t have enough to do. 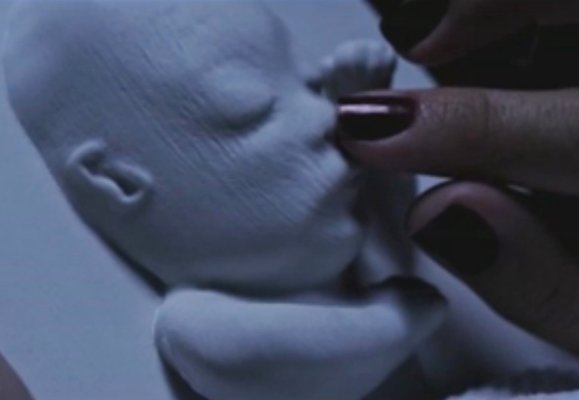 Watch a Blind Mom-to-Be Meet Meet Her Unborn Baby
Next Up: Editor's Pick