This Is the Speech That Made Winston Churchill's Career

British Prime Minister Winston Churchill gives the speech on the BBC that he just delivered at the House of Commons : "I have nothing to offer but blood, toil, tears and sweat..."
Gamma-Keystone / Getty Images
By Lily Rothman

A full 75 years after the “Blood, Toil, Tears, Sweat” speech was delivered by Winston Churchill — on May 13, 1940 — it remains one of the most famous of his prolific career. Which is only appropriate, as it was the speech that set the course for his historic leadership of Britain during World War II.

Here’s what happened: Until mere days before the speech was delivered, Churchill wasn’t Prime Minister. He was First Lord of the Admiralty and, in fact, a “longtime political enemy” of Prime Minister Neville Chamberlain, per TIME’s account in 1940.

The previous month, British forces had responded to a Nazi incursion in Norway with all confidence of success. “Instead, all the pushing—and a lot of punching, hammering, rushing and blasting—had been done by the Germans. It was the British who went out backwards, faster than they had come in,” TIME reported two weeks later. Chamberlain, called to account for the failure, merely reassured his country that, though the military operation had been a total failure, at least the retreat had been successful. His statements that it hadn’t been a total disaster were met with derision; many called for him to resign if he could not promise stronger action.

Though Chamberlain begged his parliamentary colleagues to remain unified in the face of the enemy, his case had little heft in light of recent events. When Churchill spoke, he also asked for unity—but he admitted that Norway was a failure, and galvanized support with his candor and confidence. The Labour party refused to join a national coalition government unless Churchill was in charge of it.

Churchill took office as Prime Minister on May 10, 1940. On the 13th, he delivered that famous speech, as TIME reported:

His words established a new British attitude toward the growing conflict—and a reputation that would keep him in the Prime Minister’s office through the end of the war in Europe.

Indeed, the speech was so effective that, in 2003, TIME named included it on a list of 80 days that changed the world. “The opposition Labour Party would serve in a government of national unity only if it were led by Churchill, and on the evening of May 10, as German troops massed against France, he accepted office from King George VI,” wrote TIME’s Michael Elliott. “Three days later, Churchill promised Britain only ‘blood, toil, tears and sweat.’ What he gave his country, above all, was leadership.”

Read the full 1940 story here, in the TIME Vault: Warlord for Peacemaker 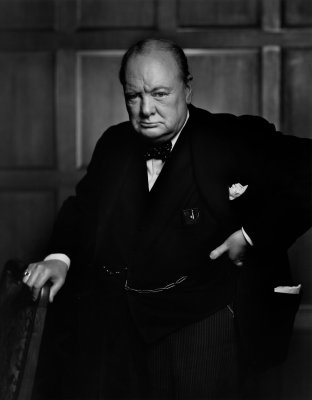 Yousuf Karsh's Masterful Portraits From Churchill to Hepburn
Next Up: Editor's Pick