Protesters march from City hall to the Sandtown neighborhood in Baltimore on May 2, 2015.
Andrew Burton—Getty Images
Ideas
By Kareem Abdul-Jabbar
Abdul-Jabbar is a six-time NBA champion and league Most Valuable Player. He is the author of the new book, Writings on the Wall.

The curfew has been lifted in Baltimore, and now all of God’s children are once again tucked back in the snug routine of their daily lives. The black temper tantrum is over, America. We can all go back to watching Castle boyishly charm his way through murder mysteries. Order is restored.

Except, as Sportin’ Life says in Porgy and Bess, “It ain’t necessarily so.”

What happened in Baltimore isn’t just a one-and-done situation. This wasn’t just a slight sprain in the ankle that we’ll be able to walk off by morning. This was a violently shattered bone that will have America limping forward on crutches for months to come, maybe even years.

One thing that history has taught us is that civil unrest is rarely just about what incites the incident. From what information the public has been given, Freddie Gray’s death seems like a malignant cocktail of negligence and abuse, and the charges brought against the six officers seem to confirm that. But we’ve seen this all before—many times.

So why now? Why Baltimore? Why Freddie Gray?

The Baltimore uprising isn’t just about Freddie Gray. The image of the cops carrying him, his legs dangling uselessly, his neck crooked awkwardly is a visual manifestation of the impotence many African Americans have felt over the past year as death after death of black people at the hands of police keep adding up. After each death there is the usual flurry of outrage, protests, political promises, celebrity tweeting, and condemnation of protestors. Then nothing happens until the next death, which is often tragically close behind. About 70 unarmed blacks have been killed by police between 1999 and 2014. The only thing that seems to change is that the list of the dead keeps getting longer.

Baltimore is the most recent in a long, frustrating line of protests that seem to vent anger, produce few substantial results, and reveal a larger pattern of systemic injustice. For African Americans, it feels as if we are all gathered together in the path of giant steamroller. We shout up at the driver to put on the brakes, but he keeps shouting for us to get out of the way. But there’s no place to go. We keep backing up and backing up. In Baltimore, it felt as though everyone’s back was against the wall, and there was no place to back up to anymore. If shouting doesn’t get the driver’s attention, maybe something more drastic will.

The protests in Baltimore were similar to the Boston Tea Party in 1773, the more than 200,000 people at the Washington, D.C. National Mall to hear Martin Luther King Jr. in 1964, and the anti-war march of more than 500,000 on Washington, D.C., in 1969. When people feel disenfranchised, helpless, and hopeless, they will take to the streets to air their grievances.

However, this is where things get tricky for the American public. Baltimore protestors weren’t just expressing their anger over the treatment of Freddie Gray; they were expressing their frustration over living in economic circumstances that makes them seem less than human to those in power. Worse, they have little hope that these circumstances will change.

During Bill Clinton’s 1992 presidential campaign, his strategist, James Carville, had everyone working on the campaign focused on one phrase: “The economy, stupid!” That phrase is the key to understanding the anguish of the protestors in Baltimore. Though Baltimore is in the richest state in the country, Maryland blacks’ median income is about $40,000 a year less than the median income of the state. Baltimore is 63% black, and in 2013, the unemployment rate for black men between 20 and 24 was 37%, compared to 10% for whites of the same age.

In Freddie Gray’s neighborhood, more than half of those between 16 and 64 are unemployed. Life expectancy in the predominantly black neighborhoods of Upton/Druid Heights is 63 years, while in the predominantly white affluent Roland Park, about five miles away, it’s 83 years. And that’s just a small sample of the economic quicksand that many black residents of Baltimore live on. How long can you politely ask for someone to throw you a lifeline before the sand swallows you whole?

What’s even more frustrating for African Americans across America witnessing the events is the blatant attempt of some in the media to portray this as (1) the result of “thugs” who want to exploit Gray’s death to stock up on some free TVs and (2) an anomaly that doesn’t represent America. Both attitudes exhibit the kind of racial profiling that is at the heart of the problem in the first place.

A Bob Gorrell political cartoon shows a black man in a hoodie and with the stubble of the terminally unemployed, holding up a sign that says: “#BLACK LIVES MATTER (but police, private property and public safety DON’T!)” A Rick McKee cartoon features another black man in a hoodie wearing sunglasses and holding a box with a giant flat-screen TV. Behind him, the city is burning. He says to a little boy, “I burned your neighborhood and looted your stores so that you can live in a more just and fair society. … You’re welcome.”

Both of these cartoons exemplify the simple-minded—and racist—idea that looters and protestors are the same because they’re black and live in the same place. Protestors want to promote a political agenda, while looters want swag. Clearly, looters are criminals hurting the cause of the protesters and should be arrested and prosecuted. But when you lump them together and call them all “thugs,” you don’t have to listen to the real issues. It’s the adult equivalent of jamming your fingers in your ears, closing your eyes, and humming loudly.

The chorus of pundits proclaiming shock at the riots is another version of indignation not supported by history. CNN’s Wolf Blitzer said it was “hard to believe this was happening in a major American city.” He then added, “I don’t remember seeing anything like this in the United States of America in a long time.” How could a journalist not remember the recent riots in Ferguson, Los Angeles, and New York?

America was born out of protest. We felt economically suppressed and politically repressed, and we changed things. Slaves weren’t freed by benevolent leaders wanting to do the right thing. No one gave the American worker better and safer conditions out of gratitude for a job well done. Vietnam veterans didn’t get their benefits from an Agent-Orange-denying government by sitting at home waiting patiently. Each time, Americans took to the streets to be heard.

I suggest we all pay attention to what’s happening in Baltimore, because it’s very likely that unless the economic and injustice issues raised there are addressed in a meaningful way across the country, we will be seeing many more Baltimores throughout the election season. 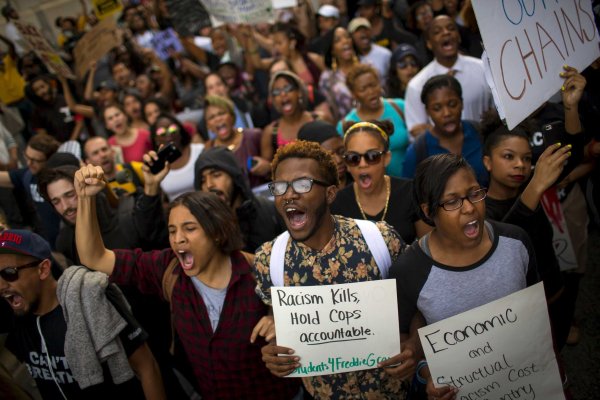 Racism Is Poisoning Our Society
Next Up: Editor's Pick