Rescue workers inspect a mass grave at an abandoned camp in a jungle in Thailand's southern Songkhla province on May 5, 2015
Surapan Boonthamon—Reuters
By Charlie Campbell

Just a stone’s throw from where Western tourists sip cocktails and bronze themselves on beaches in Thailand’s southern state of Songkhla, a macabre discovery has been made: skeletons buried in the jungle.

At least 26 of the human remains are believed to be those of Rohingya Muslims. They were murdered, it is assumed, by people smugglers after fleeing pogroms in western Burma (now officially known as Myanmar) for a new life in Muslim-majority Malaysia.

While thousands of members of this much persecuted community successfully make the perilous voyage on rickety boats, hundreds die en route and many more are held captive in jungle camps, often with the collusion of local law enforcement, until their friends or relatives cough up enough cash to buy their freedom.

As with the 18 mutilated bodies that washed up on Malaysia’s historic port island of Penang late last year, it seems likely that those recently exhumed didn’t have sufficiently affluent connections.

“Those who can pay the money are released within a few days, those who cannot pay must stay and every day they are beaten and traumatized,” Abdul Hamid, president of the Rohingya Society of Malaysia, told TIME in Kuala Lumpur last month. “Witnesses from the camps say that every week there are three or four people who die from the torture.”

The recent discovery comes as a new report reveals that a record-breaking 38 million people around the world today have been displaced within their own countries by conflict or violence. The number is the equivalent to the combined populations of London, New York City and Beijing, and signals “our complete failure to protect innocent civilians,” says Jan Egeland, secretary general at the Norwegian Refugee Council.

Among them are Burma’s 1.3 million Rohingya, described by the U.N. as “virtually friendless.” They are denied citizenship in both Burma and neighboring Bangladesh and consequently struggle on both sides of this shared frontier, many in squalid displacement camps, where food, shelter and medical care are in scandalously short supply.

Their plight has worsened since dozens were killed and thousands of homes destroyed in sectarian violence unleashed by Burma’s Buddhist majority, which first erupted in October 2012.

But the Rohingya’s problems do not end even if they are able to leave Burma. The supposedly lucky 100,000 who have reached Malaysia face a difficult time on arrival. Only around 45,000 have UNHCR cards, as registration has been closed for over six months to all but newborn babies or dependents of existing refugees and newly arrived children. They receive no government handouts nor are they allowed to work, and so must make do with irregular construction jobs, where they are liable to further exploitation.

While state-sponsored violence is an aggravating factor in the plight of the Rohingya, their real curse is a lack of citizenship and thus constitutional protection in the land of their birth. Burma may have shrugged off a half-century of brutal junta rule, but the military still maintains tight control, and the Rohingya remain pawns of a slew of generals, who see inculcating antipathy towards the Rohingya minority — they are portrayed as Bangladeshi interlopers — as their best hope of retaining power in elections slated for October.

Even Nobel Peace Prize winner Aung San Suu Kyi, who leads the opposition National League for Democracy party, refuses to unequivocally speak up for the Rohingya, calling their plight an “immigration matter,” despite that fact that many Rohingya families have histories in Burma for longer or as long as hers.

And so, as the U.S. re-engages with the Burmese government, and hails this impoverished nation’s significant strides toward democracy, those anonymous jungle graves are a grim reminder of the formidable challenges that remain, as well as of the vulnerability of all those forced from their homes. 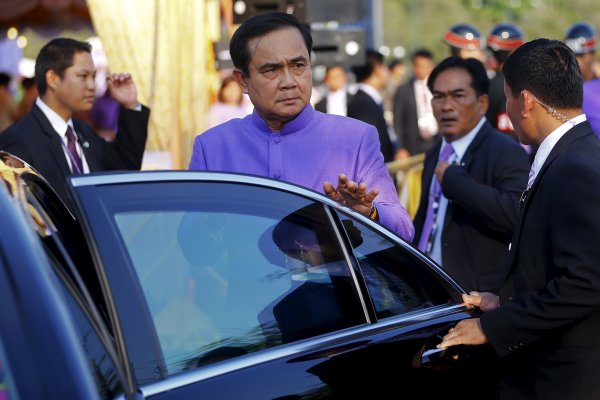 'Descent Into Dictatorship'
Next Up: Editor's Pick